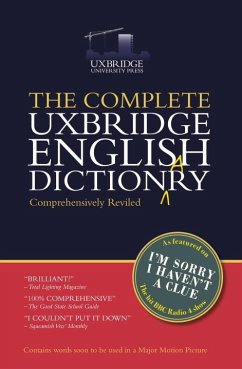 Do words fail you? In this book, you will find many of the words you use every day without ever realising that their up-to-date definition is something entirely different.

Andere Kunden interessierten sich auch für
Produktbeschreibung
Do words fail you? In this book, you will find many of the words you use every day without ever realising that their up-to-date definition is something entirely different.
Produktdetails
Produktdetails
Autorenporträt
Graeme Garden (Author) Graeme Garden is one third of the Goodies. He is a comedy legend. Tim Brooke-Taylor (Author) Tim was born in Buxton, Derbyshire, and studied at various schools in Buxton and Winchester before beginning an Economics and Law degree course at Cambridge University. In 1963, he became President of Footlights, the revue club in which he wrote and performed with Bill Oddie, Graeme Garden, John Cleese, Graham Chapman, Eric Idle, Jonathan Lynn and others. He toured extensively with the revue, Cambridge Circus, before moving into television. Tim on Telly Tim's television credits include On The Braden Beat, The Frost Programme (as editor), At Last the 1948 Show, Me and My Girl and, of course, The Goodies. From stage to page Tim has also enjoyed considerable success on the stage and has written three books, Rule Britannia, Tim Brooke-Taylor's Cricket Box and Tim Brooke-Taylor's Golf Bag, as well as contributing to The Little Book of Mornington Crescent and The Almost Totally Complete I'm Sorry I Haven't A Clue. Barry Cryer (Author) In 1958 Barry Cryer had a Number 1 hit record in Finland with the song 'Purple People Eater' by Sheb Wooley. Over his 50-year career he has written for, among many, Morecambe and Wise, Bruce Forsyth, Tommy Cooper, Frankie Howerd, Bob Hope and Richard Pryor. He is a comedy legend. Jon Naismith (Author) Jon Naismith has produced on Radio: Week Ending, The Skivers, The News Quiz, Quote...Unquote, Elastic Planet, For One Horrible Moment, And I'm the Queen of Sheba, The Labour Exchange, Do Go On and About A Dog all for BBC Radio 4, as well as twenty years of I'm Sorry I Haven't A Clue, recently voted the second greatest Radio programme of all time after The Goons. He also co-created The Unbelievable Truth. On TV he has produced and co-devised Bring Me The Head of Light Entertainment with Graham Norton and It's Only TV But I Like It with Jonathan Ross, Jack Dee, Phill Jupitus and Julian Clary and has produced This Week Only with Joe Cornish, Nick Frost, Chris Addison and Lauren Laverne for Channel 4, God Almighty with Clive Anderson for Channel 5, The Smith & Jones Sketchbook with Mel Smith and Griff Rhys-Jones for BBC1 and Shane with Frank Skinner for ITV1.
Kundenbewertungen
Schreiben Sie eine Kundenbewertung zu diesem Produkt und gewinnen Sie mit etwas Glück einen 15,- EUR bücher.de–Gutschein!
Bewertung schreiben Bewertung schreiben
Bewertung schreiben Bewertung schreiben