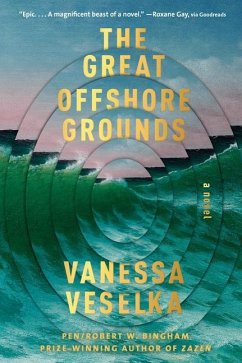 LONGLISTED FOR THE NATIONAL BOOK AWARD WINNER OF THE OREGON BOOK AWARDS' KEN KESEY AWARD FOR FICTION A wildly original, cross-country novel that subverts a long tradition of family narratives and casts new light on the mythologies-national, individual, and collective-that drive and define us. On the day of their estranged father's wedding, half sisters Cheyenne and Livy set off to claim their inheritance. It's been years since the two have seen each other. Cheyenne is newly back in Seattle, crashing with Livy after a failed marriage and a series of personal and professional dead ends. Livy…mehr

Andere Kunden interessierten sich auch für
Produktbeschreibung
LONGLISTED FOR THE NATIONAL BOOK AWARD WINNER OF THE OREGON BOOK AWARDS' KEN KESEY AWARD FOR FICTION A wildly original, cross-country novel that subverts a long tradition of family narratives and casts new light on the mythologies-national, individual, and collective-that drive and define us. On the day of their estranged father's wedding, half sisters Cheyenne and Livy set off to claim their inheritance. It's been years since the two have seen each other. Cheyenne is newly back in Seattle, crashing with Livy after a failed marriage and a series of personal and professional dead ends. Livy works refinishing boats, her resentment against her freeloading sister growing as she tamps down dreams of fishing off the coast of Alaska. But the promise of a shot at financial security brings the two together to claim what's theirs. Except, instead of money, what their father gives them is information-a name-which forces them to come to grips with a long-held family secret. In the face of their new reality, the sisters and their adopted brother each set out on journeys that will test their faith in one another, as well as their definitions of freedom. Moving from Seattle's underground to the docks of the Far North, from the hideaways of the southern swamps to the storied reaches of the Great Offshore Grounds, Vanessa Veselka spins a tale with boundless verve, linguistic vitality, and undeniable tenderness.
Produktdetails
Autorenporträt
Vanessa Veselka is the author of the novel Zazen, which won the PEN/Robert W. Bingham Prize. Her short stories have appeared in Tin House and ZYZZYVA, and her nonfiction in GQ, The Atlantic, Smithsonian, The Atavist Magazine, and was included in The Best American Essays and the anthology Bitchfest: Ten Years of Cultural Criticism. She has been, at various times, a teenage runaway, a sex worker, a union organizer, an independent record label owner, a train hopper, a waitress, and a mother. She lives in Portland, Oregon.
Rezensionen
I was riveted by every line, the humor of being alive, the pathos of this deeply American narrative, and the energy of the prose, which contains everything from the blunt and stunning grammar of history to the personal language of the heart.
Hilary Leichter, Oregon Book Awards judges' citation

Deeply moving . . . [Veselka] is a remarkable writer, able to break through the surfaces of her narrative to reveal the animal chaos underneath . . . In its way, that merciless truth of the universe represents a sort of mercy, and it makes The Great Offshore Grounds a saga of acceptance, which is to say a book of life.
David L. Ulin, Los Angeles Times

Vivid . . . The portrayal of the choices one must make when living paycheck to paycheck in late capitalist America is realistic and devastating . . . The deeply moving and nuanced mother narrative is a rewarding journey in itself . . . Veselka is a talented writer, with sensual imagery and an unflinching ability to stick with troubled and troublesome characters.
Sarah Neilson, The Seattle Times

Animating . . . Kirsten, Livy, Cheyenne, and Essex s subsequent misadventures are compelling in and of themselves, irrespective of whether they serve to highlight the rapacity of unchecked neoliberalism or the growing hole in America s social safety net. Rather than subordinate her protagonists experiences to a larger narrative, Veselka patiently waits for a chance to make a connection between one and the other . . . In Veselka s telling, however, the story is in fact about [vulnerable Americans] and, with the necessary adjustments, countless other underprivileged men and women caught up in a system that has little use for their kind.
Rayyan Al-Shawaf, The Boston Globe

A magnificent beast of a novel. Utterly engrossing. Original. One of the rare novels that understands the realities of American poverty. Epic.
Roxane Gay, author of Difficult Women

"The Great Offshore Grounds reminded me of what a great novel can do Veselka's seafaring epic has the forward momentum of a grand adventure and the spiraling depth of a new myth. All the pleasure of eighteenth century storytelling renewed for our newborn millennium. I love this textured, tonally complex wonder of a book, a quest for Melville's 'unimaginable sublimity' that never shies away from the messy flux of the body, or the oceanic scope of our shared global history. It's also a blast to read darkly hilarious, astral, cerebral, suspenseful, warm-blooded, divine."
Karen Russell, author of Orange World

"I immediately fell in love with the phenomenal sisters at the heart of Vanessa Veselka's supernova of a new novel, The Great Offshore Grounds. This novel is thrilling in its content, daring in heart, and makes a helix between a novel of ideas and the best damn story of women who forge their identities on their own terms that I've read in years."
Lidia Yuknavitch, author of Verge

"The Great Offshore Grounds delivers on the promise Vanessa Veselka made with her excellent debut, Zazen. Large in scope and heart, Veselka skillfully illustrates human behaviors of every shade and iteration. She s a specialist, a keen interpreter of our demented society, and an enviable storyteller. I ve been waiting long years for this novel. It was worth the wait."
Patrick deWitt, author of French Exit

"Vanessa Veselka is an expert portraitist of the forgotten and left behind, people struggling to make ends meet, broke and underemployed, people of deep humanity and shallow finances trying to find their place in dysfunctional America. The Great Offshore Grounds is an unforgettable journey through a country full of malice and greed and beauty and grace. A brilliant and fearless book."
Nathan Hill, author of The Nix

"Vanessa Veselka writes with the power of the ocean tides, and The Great Offshore Grounds teems with life as beguiling and beautiful as any undersea grotto. This novel is warmhearted and coldblooded and I ll never forget Livy and Cheyenne and their fierce bond and bottomless wonder. Neither will you."
Peter Geye, author of Northernmost

"The Great Offshore Grounds is a binge-worthy, kaleidoscopic, twenty-first century American family odyssey. Vanessa Veselka spins a radical, delicious, epic tale of women blasting their way forward to free themselves of the past. Her characters play by no rules but their own and they pull you in with oceans of black humor and so much heart."
Andrea Kleine, author of Eden

"The Great Offshore Grounds blew me away. The tangled journeys of three siblings in the hardest of times pursuing freedom and love through a broken world will both move and dazzle readers. Wry, epic, glorious."
Emma Donoghue, author of Akin

This is a novel that feels like hitchhiking: The route is unpredictable but fated and exciting, with an air of treachery. If you relate to the idea of desperate people doing desperate things for reasons only partly clear to themselves, you will find it thrilling.
Molly Young, Vulture

Energetic . . . points of view shift kaleidoscopically, passages of history and politics are woven into the questlike narratives of the characters. The result is a fiery and occasionally luminous chaos that feels true to the experience of those for whom each day is lived at the edges of mainstream society.
Kirkus…mehr
Kundenbewertungen
Schreiben Sie eine Kundenbewertung zu diesem Produkt und gewinnen Sie mit etwas Glück einen 15,- EUR bücher.de–Gutschein!
Bewertung schreiben Bewertung schreiben
Mehr zum Thema