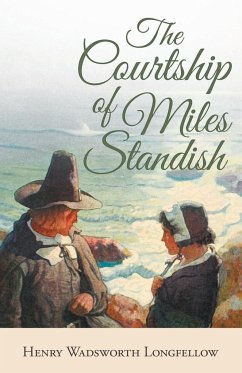 Jetzt bewertenJetzt bewerten
Andere Kunden interessierten sich auch für
Produktdetails
Autorenporträt
Henry Wadsworth Longfellow (February 27, 1807 - March 24, 1882) was an American poet and educator whose works include "Paul Revere's Ride", The Song of Hiawatha, and Evangeline. He was also the first American to translate Dante Alighieri's Divine Comedy and was one of the Fireside Poets from New England. Longfellow was born in Portland, Maine, which was then still part of Massachusetts. He studied at Bowdoin College and became a professor at Bowdoin and later at Harvard College after spending time in Europe. His first major poetry collections were Voices of the Night (1839) and Ballads and Other Poems (1841). He retired from teaching in 1854 to focus on his writing, and he lived the remainder of his life in the Revolutionary War headquarters of George Washington in Cambridge, Massachusetts. His first wife Mary Potter died in 1835 after a miscarriage. His second wife Frances Appleton died in 1861 after sustaining burns when her dress caught fire. After her death, Longfellow had difficulty writing poetry for a time and focused on translating works from foreign languages. He died in 1882. Longfellow wrote many lyric poems known for their musicality and often presenting stories of mythology and legend. He became the most popular American poet of his day and also had success overseas. He has been criticized by some, however, for imitating European styles and writing specifically for the masses. Longfellow was born on February 27, 1807 to Stephen Longfellow and Zilpah (Wadsworth) Longfellow in Portland, Maine,[1] then a district of Massachusetts.[2] He grew up in what is now known as the Wadsworth-Longfellow House. His father was a lawyer, and his maternal grandfather was Peleg Wadsworth, a general in the American Revolutionary War and a Member of Congress.[3] His mother was descended from Richard Warren, a passenger on the Mayflower.[4] He was named after his mother's brother Henry Wadsworth, a Navy lieutenant who had died three years earlier at the Battle of Tripoli.[5] He was the second of eight children.[6] Longfellow was descended from English colonists who settled in New England in the early 1600s.[7] They included Mayflower Pilgrims Richard Warren, William Brewster, and John and Priscilla Alden through their daughter Elizabeth Pabodie, the first child born in Plymouth Colony.[8] Longfellow attended a dame school at the age of three and was enrolled by age six at the private Portland Academy. In his years there, he earned a reputation as being very studious and became fluent in Latin.[9] His mother encouraged his enthusiasm for reading and learning, introducing him to Robinson Crusoe and Don Quixote.[10] He published his first poem in the Portland Gazette on November 17, 1820, a patriotic and historical four-stanza poem called "The Battle of Lovell's Pond".[11] He studied at the Portland Academy until age 14. He spent much of his summers as a child at his grandfather Peleg's farm in Hiram, Maine.
Kundenbewertungen
Schreiben Sie eine Kundenbewertung zu diesem Produkt und gewinnen Sie mit etwas Glück einen 15,- EUR bücher.de–Gutschein!
Bewertung schreiben Bewertung schreiben