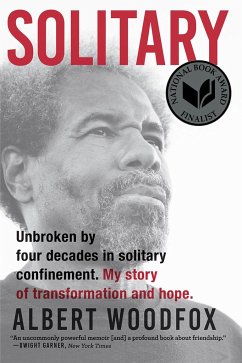 The extraordinary saga of a man who, despite spending four decades in solitary confinement for a crime of which he was innocent, inspired fellow prisoners, and now all of us, with his humanity

Andere Kunden interessierten sich auch für
Produktbeschreibung
The extraordinary saga of a man who, despite spending four decades in solitary confinement for a crime of which he was innocent, inspired fellow prisoners, and now all of us, with his humanity
Produktdetails
Autorenporträt
Albert Woodfox was born in 1947 in New Orleans. A committed activist in prison, he remains so today, speaking to a wide array of audiences, including the Innocence Project, Harvard, Yale, and other universities, the National Lawyers Guild, as well as at Amnesty International events in London, Paris, Denmark, Sweden, and Belgium. His book Solitary was a finalist for the Pulitzer Prize and the National Book Award for Nonfiction, and winner of the Stowe Prize and the Louisiana Endowment for the Humanities Book of the Year. It has been published in the UK, Canada, Australia, Spain, Germany, and Brazil. He lives in New Orleans.
Rezensionen
Praise for Solitary: