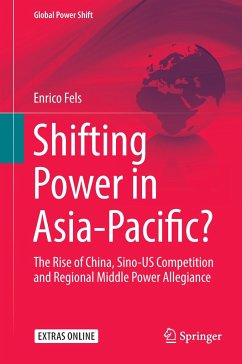 This book investigates whether a power shift has taken place in the Asia-Pacific region since the end of the Cold War. By systematically examining the development of power dynamics in Asia-Pacific, it challenges the notion that a wealthier and militarily more powerful China is automatically turning the regional tides in its favour. With a special emphasis on Sino-US competition, the book explores the alleged linkage between the regional distribution of relevant material and immaterial capabilities, national power and the much-cited regional power shift.
The book presents a novel concept for…mehr

Andere Kunden interessierten sich auch für
Produktbeschreibung
This book investigates whether a power shift has taken place in the Asia-Pacific region since the end of the Cold War. By systematically examining the development of power dynamics in Asia-Pacific, it challenges the notion that a wealthier and militarily more powerful China is automatically turning the regional tides in its favour. With a special emphasis on Sino-US competition, the book explores the alleged linkage between the regional distribution of relevant material and immaterial capabilities, national power and the much-cited regional power shift.

The book presents a novel concept for measuring power in international relations by outlining a composite index on aggregated power (CIAP) that includes 55 variables for 44 regional countries and covers a period of twenty years. Moreover, it develops a middle power theory that outlines the significance of middle powers in times of major power shifts. By addressing political, military and economic cooperation via a structured-focused comparison and by applying a comparative-historical analysis, the book analyses in depth the bilateral relations of six regional middle powers to Washington and Beijing.

Produktdetails
Autorenporträt
Enrico Fels is a research fellow and lecturer at the Center for Global Studies (CGS), University of Bonn. He holds a Bachelors degree from Ruhr-University Bochum in Political Science, Economics and Sociology and has a Masters degree from the Australian National University in Strategic Studies, where he also was a T.B. Millar Scholar in Strategic and Defence Studies. Enrico received his PhD from Bonn University. He is regularly presenting at international conferences, publishes his research in books and articles and is frequently invited to give lectures. Enrico leads the CGS research group on "Security and Diplomacy" and is co-editor to the book Power in the 21st Century. International Security and International Political Economy in a Changing World (Springer, 2012). His research interests and expertise include traditional and non-traditional security issues, international political economics as well as the strategic and geoeconomic consequences of an emerging Asia to Europe and the United States.

Inhaltsangabe
Acknowlegements.- 1 Opening the Floor: The Rivalry Between Eagle and Dragon in Asia-Pacific.- 2 Theoretical Framework: Realism as a Lens for Analysis.- 3 Power in International Affairs.- 4 Towards a Middle Power Theory in International Affairs.- 5 Taking Stock of Asia-Pacific's Tangible Power Changes - Measuring Aggregate Power.- 6 Determining the (Almost) Intangible: Measuring Relational Power.- 7 Australia - Trading With the Dragon, But Flying With the Eagle.- 8 Pakistan - "Iron Brother" to Beijing, Reluctant Partner for Washington.- 9 Japan - Warm Ties to Washington, "Cold Politics" With Beijing.- 10 Republic of Korea - No Longer a Small "Shrimp Among Whales".- 11 Thailand - Bending With the Wind Again?.- 12 Indonesia - Rowing Between Two Reefs Once More.- 13 Conclusion - Does "Rising" in Power Equate to "Shifting" of Power?.
Rezensionen
"Fels's book can easily be seen as the most comprehensive and conceptually rigorous academic work currently available assessing China's power. ... His discussion of individual theories of power is so comprehensive that it could work as a stand-alone book. Similarly, chapters on regional middle powers are extensive and provide excellent insights into these countries' perspectives on China and the United States." (Prof. Dr. Richard Q. Turcsanyi, International Affairs, Vol. 94 (1), 2018)

"Enrico Fels, a research fellow at the University of Bonn, marshals a staggering amount of empirical and theoretical data in attributing the global power transition to decentralized shifting allegiances-foremost in the Asia-Pacific area-and to fluid realignments indicative of the ceaseless yet immensely more complex balancing, unbalancing, and rebalancing of power. ... Shifting Power in Asia-Pacific? ... the product of dedicated, even prodigious, research; of laboriously aggregated and interpreted data; and of creative conceptual framing - provides a useful corrective to the previous two US-centric studies. ..." (Prof. Dr. Aharon Klieman, Israel Journal of Foreign Affairs, July, 2017)

"Fels certainly makes a significant contribution in mapping the pattern of middle-power-oriented material and relational power shifts among great powers ... . Fels' book, written in an exceptionally scholarly manner, will prove highly valuable to academics, policymakers, investors and other stakeholders who want to be well informed of the changing strategic landscape and foreign policy behaviors in the Asia-Pacific, including the economic and political risks that may arise as a result of increased Sino-U.S. competition." (Dr. Aaron Jed Rabena, Asian Politics & Policy, Vol. 9 (4), 2017)

"The book authored by Enrico Fels is absolutely worth recommending for both scholars interested in the Asia-Pacific region and students willing to understand this region and the power competition in the region better. It is definitely well designed and has a unique research concept. ... It's been innovative in its approach, especially by the introduction of the Composite Index of Aggregate Power (based on a well-designed formula, but also impressive research and data gathered)." (Marcin Grabowski, Politeja, Vol. 5 (50), 2017)

"Without a doubt, the book Shifting Power in Asia-Pacific? The Rise of China, the Sino-US Competition and the Regional Middle Power Allegiance should become a compulsory reading for all those who are researching the Asia-Pacific region, as well as for researchers dealing with measuring power in international relations. Due to the topic's current importance, it should also become a text for lecturers, experts and students who are interested in the problems of the modern world and the challenges it faces." (Prof. Dr. Agata Wiktoria Zietek, Stosunki Miedzynarodowe - International Relations, Vol. 53 (2), 2017)

"The thorough and methodologically diligent approach and the analysis' balanced conclusion are a very welcome contribution to the debate amidst a worsening security situation in Asia-Pacific. One very outstanding accomplishment of the book is that it draws attention to some wrongly neglected aspects of the Sino-US rivalry ... Interests, power instruments and behavioural patterns of middle powers in Asia-Pacific will hopefully receive more attention in future analyses of the Sino-US competition. This study gives an overdue impetus to do so." (Dr. Sarah Kirchberger, SIRIUS - Zeitschrift für Strategische Analysen, Vol. 1 (4), 2017)