Machiavelli, Hobbes, and the Formation of a Liberal Republicanism in England 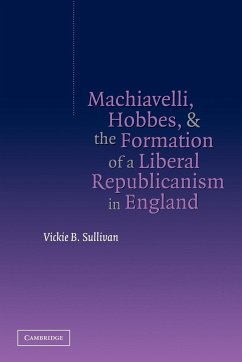 Machiavelli, Hobbes, and the Formation of a Liberal Republicanism in England

Certain English writers of the seventeenth and early eighteenth centuries, whom scholars often associate with classical republicanism, were not, in fact, hostile to liberalism. Indeed, these thinkers contributed to a synthesis of liberalism and modern republicanism. As this book argues, Marchamont Nedham, James Harrington, Henry Neville, Algernon Sidney, and John Trenchard and Thomas Gordon, the co-authors of a series of editorials entitled Cato's Letters, provide a synthesis that responds to the demands of both republicans and liberals by offering a politically engaged citizenry as well as the protection of individual rights. The book also reinterprets the writings of Machiavelli and Hobbes to show that each contributed in a fundamental way to the formation of this liberal republicanism.

"Important and insightful...a valuable contribution to the study of early-modern political thought that extends beyond illuminating such seminal thinkers--itself an impressive feat--and goes further to provide a comprehensive acocunt of the way in which a number of well-defined ideas and principles shaped the development of nascent liberal and republican theory in England." APSA Perspectives on Politics

"This is an important, original, scholarly, and powerfully argued book. Though its primary readership will probably be political scientists--and especially theorists--it also has much to tell scholars whose main interests are in early modern British--and, indeed, American--history."
H-Albion