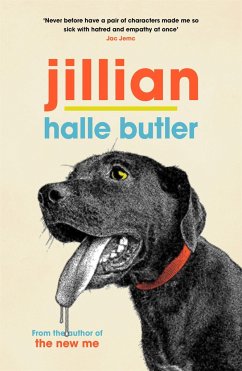 From the author of the 'great' (Dolly Alderton), 'terrific' (Zadie Smith) The New Me, comes a subversive, hilarious portrait of two colleagues, each more like the other than they would care to admit.

Andere Kunden interessierten sich auch für
Produktbeschreibung
From the author of the 'great' (Dolly Alderton), 'terrific' (Zadie Smith) The New Me, comes a subversive, hilarious portrait of two colleagues, each more like the other than they would care to admit.
Produktdetails
Autorenporträt
Halle Butler is a writer living in New York City. The author of Jillian, she has been named a National Book Award Foundation's "5 Under 35" honoree and a Granta Best Young American Novelist.
Rezensionen
Acclaim for Halle Butler and Jillian:

In its ability to induce paralyzing existential depression, the fiction of Halle Butler is perhaps matched only by those Black Friday news stories in which grandmothers get trampled in front of stacks of fifty-five-inch TVs. Jia Tolentino, The New Yorker

So human that you ll want to push [the characters] away from you and cuddle them close at the same time. Flavorwire

Subversive . . . a frank account of discontent [and] a depressing yet exacting criticism of modernity.   PopMatters

Outrageous [and] amusing . . . [Jillian] reads like rubbernecking or a junk-food binge, compelling a horrified fascination and bleak laughter in the face of outrageously painted everyday sadness.   Kirkus Reviews

[A] poison pill of a novel . . . Butler s aim is perfect, and her touch deft.   Publishers Weekly

This book is incredible. The deadpan way it nails what it is to be a human who lies to herself and tells different lies to everyone else makes me want to laugh and scream. It is hilarious and weird, my two favorite qualities in a book.   Lindsay Hunter, author of Ugly Girls and Don't Kiss Me

An authentic and beautiful portrait of a self-proclaimed asshole.   Chelsea Martin, author of Even Though I Don't Miss You

Halle Butler s Jillian is a wry, smart portrait of two women set on separate courses of self-destruction, each of them judging the other on theway down. This is a bold debut, a quick, vicious ride.   Cari Luna, author of The Revolution of Every Day

A hilariously brutal tale of a woman destroying herself with cheery selfishness. I laughed myself nauseous watching the people surrounding Jillian struggle between exasperated judgment and aggravated compassion. Never before have a pair of characters made me so sick with hatred and empathy at once. Butler is writing exactly what I want to read.   Jac Jemc, author of A Different Bed Every Time and My Only Wife