HYMNS TO THE NIGHT AND SPIRITUAL SONGS 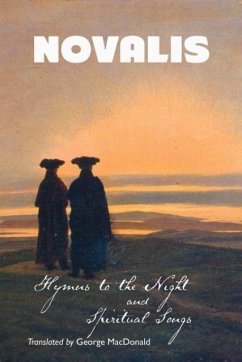 HYMNS TO THE NIGHT AND SPIRITUAL SONGS

Andere Kunden interessierten sich auch für
Produktbeschreibung
NOVALIS: HYMNS TO THE NIGHT AND SPIRITUAL SONGS A new edition of Novalis' Hymns To the Night, and Spiritual Songs, translated by George MacDonald, with an introduction and notes by Carol Appleby. Includes the German text. This edition features a collection of 26 Romantic, European paintings from the late 1770s and early 1800s (the era of Hymns To the Night and Spiritual Songs), which have been interwoven with the poems. Artists include: J.M.W. Turner, Giambattista Tiepolo, Caspar David Friedrich, Philipp Otto Runge, Henry Fuseli, Thomas Cole, J.A.D. Ingres, and Jacques-Louis David. Novalis (Friedrich von Hardenberg, 1772-1801) is the most mystical of the German Romantic poets. He is at once the most typical and the most unusual of the German Romantic writers, indeed, of all Romantic poets. His best known work, Hymns To the Night, was published in 1800. Novalis is supremely idealistic, far more so than Johann Wolfgang von Goethe or Heinrich Heine. He died young, which makes him, like Percy Bysshe Shelley and John Keats, something of a hero (or martyr). He did not write as much as Shelley, but his work, like that of Keats or Arthur Rimbaud, promised much. For Michael Hamburger, Novalis' poetry is almost totally idealistic: Novalis's philosophy, then, is not mystical, but utopian. That is why his imaginative works are almost wholly lacking in conflict. They are a perpetual idyll. It's true that Novalis' work is supremely idealistic, and utopian. But it is also mystical, because it points towards the invisible, unseen and unknown, and aims to reach that ecstatic realm. Novalis wrote: The sense of poetry has much in common with that for mysticism. It is the sense of the peculiar, personal, unknown, mysterious, for what is to be revealed, the necessary-accidental. It represents the unrepresentable. It sees the invisible, feels the unfeelable, etc... The sense for poetry has a close relationship with the sense for augury and the religious sense, with the sense for prophecy in general. Glyn Hughes remarks of Novalis: 'The sustaining interest in the reading of Novalis's works is the sense of contact with a mind of visionary intensity and total commitment. The poetic achievement is in the momentary glimpses of ideal reality: what, in other contexts, we should call epiphanies. (61) The translator of Hymns To the Night, Scottish fantasist George MacDonald (1824-95), included Lewis Carroll and John Ruskin among his literary friends. His well-known works were Phantastes (1858), Lilith (1895), Bannerman's Boyhood and the Curdie children's stories: The Princess and the Goblin (1872) and The Princess and Curdie (1882). MacDonald's books were a significant influence on both J.R.R. Tolkien and C.S. Lewis. Fully illustrated with many classic paintings, as well as images of Novalis. With bibliography and notes. 176 pages. ISBN 9781861715234. www.crmoon.com
Produktdetails
Produktdetails
Kundenbewertungen
Schreiben Sie eine Kundenbewertung zu diesem Produkt und gewinnen Sie mit etwas Glück einen 15,- EUR bücher.de–Gutschein!
Bewertung schreiben Bewertung schreiben
Bewertung schreiben Bewertung schreiben