Business Practices in a Stigmatized Trade 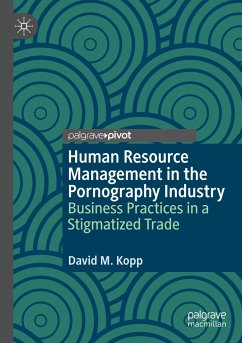 Business Practices in a Stigmatized Trade

While pornography is stigmatized as "dirty work," it faces many of the same operational considerations as traditional industries. From increasing competition, new technology that impacts services, to health and workplace safety issues, the pornography industry also utilizes and applies HRM strategies that include recruiting, selecting and retaining the best (sex) workers. As a follow up to his last book on the social history of training and development (2018), Kopp writes this final installment of a system contained within an unconventional setting as he reflects and distills the facets of…mehr

Andere Kunden interessierten sich auch für
Produktbeschreibung
While pornography is stigmatized as "dirty work," it faces many of the same operational considerations as traditional industries. From increasing competition, new technology that impacts services, to health and workplace safety issues, the pornography industry also utilizes and applies HRM strategies that include recruiting, selecting and retaining the best (sex) workers. As a follow up to his last book on the social history of training and development (2018), Kopp writes this final installment of a system contained within an unconventional setting as he reflects and distills the facets of human resource management found in the pornography industry.

Specifically, this book explores traditional human resource management processes and practices, and examines how common HRM systems are contextualized in an "organization-as-pariah" venue. Topics covered include recruiting, career development, performance management and workforce diversity, offering readers a value-neutral, analytical assessment of the HR practices in the unconventional industry and stigmatized trade that is pornography.

Produktdetails
Autorenporträt
David M. Kopp is Associate Vice Provost of Extended Learning and Professor of Human Resource Development at Barry University, USA. In addition to academia, he works with both profit and non-profit organizations focusing on leadership, strategic planning, organizational change and performance improvement. He is the author of Human Resource Development: Performance Through Learning and Famous (and Infamous) Workplace and Community Training.
Inhaltsangabe
1) Introduction - In this introductory chapter, the author will establish the context by first providing an overview of the ubiquitous pornography industry, including a modern history, definitions (e.g., Supreme Court Justice Potter Stewart, "I know it when I see it."), as well as, describing the traditional business operation, which will introduce the reader to the human resource management (HRM) practices and how these traditional HR practices are utilized within this non-traditional industry. The chapter will also introduce the reader to the construct of so-called "dirty work" and the organization-as-pariah.

This chapter will give the reader an overview of the discipline of Human Resource Management (see above graphic) and will serve as a good primer for the rest of the following chapters.

2) Recruiting, Selecting, and Retaining Talent - In this chapter, the author will describe the processes of how workers in pornography are recruited (e.g., Craigslist) and/or endeavor to work in the porn industry, both in front and behind the camera. As the author has seen, like in traditional organizations, employers in pornography are looking for workers who are motivated, have a great attitude and good work ethic. For example, according to Berg's (2015) field work, before they cast someone, producers of pornography want to tell a little bit about a prospect's psychological state, too. How eager they are to do it? How motivated by money they are to do it, as opposed to the fun aspect. As former adult film actress, Aurora Snow, also expressed,

Just like any other job, punctuality and preparation are necessary for long-term success. Showing up for work two or three hours late won't get a performer fired, but word spreads quickly. And this occupation doesn't have defined shifts. A day's work can be anywhere from three to 22 hours long, depending on the scene. And forget about anything resembling cancellation fees. If a scene is called off, not only does no one get paid, the companies lose money on location rental and kill fees. (Snow, 2016).[1]

Specific worker profiles will be explored, as well as, worker turnover and retention.

3) Managing Performance - In this chapter, the author will explore performance management and the skill sets needed to perform in adult films. Male performers, for example, have their own unique set of challenges. According to adult film producer and director, Dan Leal, "Every man is on penis pill supplements or injects; you have to be, and any guy who says he isn't is lying. In the real world, you don't have sex for this long; that's the reality[2]." The author will also explore how performers train and keep in form. That is, similar to professional athletes, performers develop routines. While performing, actors must focus on such things as timing, where the camera is, and what angle might be best for the camera. The author will seek out additional interviews using narrative inquiry to glean a day in the life of an adult performer and the knowledge, skills, and attitudes (KSAs) required to do the job.

However, to be clear, the larger inquiry in this Performance chapter will be to not only underscore the operational side of this stigmatized industry, but also analysis of performance standards in the industry, per se. The author will spend much time in this chapter analyzing the aspects of training and performance standards for adult entertainment workers. That is, similar to professional athletes, performers develop routines, too, to stay at the top of their game. After his field research, the author will analyze a day in the life of an adult performer vis-à-vis to the requisite knowledge, skills, and attitudes (KSAs) required to perform (on) the job. For example, a fundamental part of HR systems is performance management and analysis including the metrics that distinguish between "good" performance (e.g., meeting or exceeding expectations) and "bad" performance (e.g., actual performance is less than expected performance.) The example used in the Leal quote was just an attempt, by way of anecdote, to better understand how adult entertainment workers try to attain and ensure that the required, expected performance is achieved.

4) Career Development - In this chapter, career development aspects will be explored. Many workers in pornography endeavor to leave performing to become producers and directors in the adult film business, as well as, start their own pornography companies. Some performers even go onto mainstream movies and entertainment like Jenna Jameson and Traci Lords. Also explored is how mainstream celebrities became more popular or discovered because of the release of a sex tape. Examples of this are with Pamela Anderson & Tommy Lee, Montana Fishburne and in the case of Kim Kardashian, a sex tape led to an empire.

5) Diversity and Multiculturalism - In this chapter, the author investigates the state of diversity in the pornography workplace. According to Flory (2015), the pornography industry has a diversity problem[3]. This hierarchy usually proceeds according to which sex acts are considered most taboo and, sometimes, most physically demanding for the female performer. However, "interracial" porn, which is frequently seen as the ultimate feat for an actress, is held out as more extreme not because of which body part goes where, but because the adult industry reflects the old attitude society still holds on to: that the color of a sexual partner's skin can by itself make the act forbidden. The author explores the state of diversity and biases in pornography industry.

6) Compensation - In this chapter, the author explores the compensation framework in the pornography industry. Using recent data, the reader will get a sense as to the remuneration of different jobs within the industry. For example, a recent CNBC survey[4] of pornography workers that the more extreme acts command higher rates, and the most extreme acts can go for $1,800 to $2,500. What follows is a recently published wage plan for the pornography industry:

The author will also investigate the benefits packages or non-cash compensation, if any.

Exploring the compensation framework of a (stigmatized) organization is a significant part of HR analysis and practice. The intent of this chapter is not to just reveal or expose the wage plans within the pornography industry, but to explore and evaluate the wage plan and benefits of the pornography industry as it relates also to views of compensation for work, as well. For example, compensation as a tool for organizational oppression? Additionally, the author will examine compensation from a critical theory viewpoint, discussing pay for work and "behavior in return for compensation" paradigms from management's assumptions about workers and pay-for-performance (e.g., Theory X assumptions). Additionally, I will analyze compensation from an overarching inducement standpoint-is/was compensation the sole motivator for adult entertainment workers?

7) Workplace Health and Safety - In this chapter, the author will explore the health and safety practices in the pornography industry. Adult film industry workers face serious health risks due to potential infection with HIV and other pathogens transmitted through sexual contact. The author will look into recent legislation impacting the pornography industry such as Proposition 60 in California which enforces the existing mandatory condom rule and provide other health protections for adult film performers. Also, OSHA and workers compensation is discussed.

8) Porn and HRM: Axiological Issues - The concluding chapter will explore the overarching questions that are presented in the introductory chapter as well as lessons learned. One benefit of examining aspects of HR in situ within the context of a so-called pariah industry is that we are better positioned to reflect upon another theme proffered here, specifically, one that considers the axiology of human resources: is HR amoral? In other words, the construct of HR, like with food, water and oxygen is-prima facie-value-neutral; that is, until seemingly placed into a context where it risks being rendered guilty by association. In sum, we contemplate the question, Does "dirty work" equate to "dirty HR"?