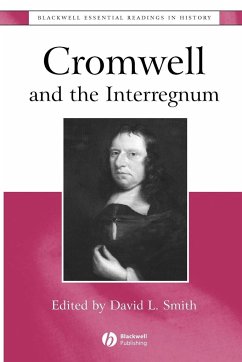 Andere Kunden interessierten sich auch für
Produktbeschreibung
This book brings together eight of the most influential recent articles on Oliver Cromwell and the Interregnum. Brings together seminal articles on Oliver Cromwell and the Interregnum. Illuminates the personality of Cromwell and his achievements. Includes treatments of Ireland and Scotland alongside discussion of England. Editorial material introduces students to the historiographical issues.
Produktdetails
Autorenporträt
On The Author, By The Author I started writing very early in life, weaving short stories, and creating a virtual army of signature characters. If there was one particular activity that contributed the most to my writing and desire to become a weaver of tales, it would have to be good old-fashioned Dungeons and Dragons. I spent a large portion of my adolescence crafting collaborative stories with my friends and family, often finding myself in the Game Master's chair. It cannot be overstated how essential the skills I learned while Role-Playing are to my author's journey. The first ideas for A World Gone Wrong surfaced over twenty years ago when I was starting High School. For years I developed the story in my spare time, creating a world, its villain, and its various heroes. At first, it was a fantasy but slowly meandered its way into the Sci-Fi Epic that it is today. Despite the changes, there was always a protagonist named John, an antagonist called Xavier Ronyn, and an Illuminati style organization known as the CORPS. Eventually, the story found some coherency, and I began to build a world. The World Gone Wrong itself is truly massive, with a large amount of fleshed out details that will produce stories for years to come. Unfortunately for all of us, life can make achieving our dreams difficult. I became a father of a beautiful girl and a handsome boy. Like most blue-collar Americans, much of my time was spent working, being a dad, and generally not writing. Unfortunately, in March 2017, my ability to work would come screeching to a halt when a construction-site accident left me physically mangled; nine months later, I would lose my lower-right leg. Suddenly faced with a large amount of free time spent relegated to a bed or chair, I began to write again. Within a year, the first draft of A World Gone Wrong was nearly complete, and I was suddenly faced with the realization of a dream: to become a published author. Now I study computer science and continue to work on the series. There are plans for novels, novellas, collections of short stories, and even my very own Pen and Paper RPG. The future is bright, and I hope to have you, dear reader, along for the journey.
Inhaltsangabe
Acknowledgements.

1. Oliver Cromwell, the Regicide and the Sons of Zeruiah (JohnMorrill, University of Cambridge and Philip Baker, AssociateEditor, The New Dictionary of National Biography).

2. Oliver Cromwell and the Sin of Achan (Blair Worden,University of Sussex).

3. The Cromwellian Protectorate: A Military Dictatorship?(Austin Woolrych, University of Lancaster).

5. Oliver Cromwell and the Localities: The Problem of Consent(Anthony Fletcher).

Index.
Rezensionen
"Here are eight of the best essays of the past twenty years onOliver Cromwell in power. The collection is enhanced by DavidSmith's lucid and comprehensive introduction summarizing thecurrent historiography on politics and religion during theInterregnum."
--Ian Gentles, Glendon College, Toronto

"This collection of important articles on the 1650s will be aboon to everyone interested in discovering more about the historyof the Commonwealth and Protectorate, as will the editor'sintroduction, which is a splendid guide to many important themes ofthe history of that period."
--Barry Coward, Birkbeck College, London
Kundenbewertungen
Schreiben Sie eine Kundenbewertung zu diesem Produkt und gewinnen Sie mit etwas Glück einen 15,- EUR bücher.de–Gutschein!
Bewertung schreiben Bewertung schreiben
Mehr zum Thema