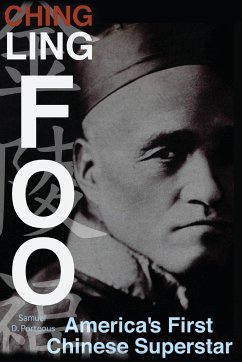 Andere Kunden interessierten sich auch für
Produktbeschreibung
Ching Ling Foo: America's First Chinese Superstar tells the incredible story of the iconic Chinese magician Ching Ling Foo's obstacle laden rise to unprecedented fame and private railway car riding fortune as a bustling, polyglot, entertainment mad, ever richer, disruptive technology embracing America burst into the Twentieth Century. Ching Ling Foo; reportedly the greatest illusionist ever seen on American soil along with his talented family of musicians and acrobats overcome on stage attacks, deportation attempts, homeland tragedy, and a talented and diabolically clever American copycat to make an indelible impact on American popular culture becoming the highest paid, most popular performers in the United States - twice! Ching Ling Foo's story is a magical one that, with its focus on the interaction of Chinese and Western cultures, geopolitical tensions, international intrigue, nativism, the importance of celebrity and disruptive technological developments seemingly has much resonance for our current era. Even a partial list of "the Original Chinese Conjurer's accomplishments still dazzle: · Highest paid and most popular performer in American vaudeville, twice breaking box office records from 1898-1900 and again from 1912-1915, · Inspired a mania for Chinese magic, a seemingly endless list of copycats, and one real genius: William Robinson, a.k.a. Chung Ling Soo, the doomed rival with whom Foo would become paired for eternity. · Subject of a historic, precedent-setting deportation trial, closely followed across the U.S. · Maker, in 1899, of the first sound recordings of Chinese music and singing. · Instigator of the infamous 1905 London "World Championship of Chinese Magic." This much-hyped "War of the Wizards" would pit Foo against archrival Chung Ling Soo, the stage name of American performer William Robinson-the man who had appropriated both Foo's act and his identity. The contest and its denouement would result in an enduring mystery when, at the last minute, the sphinxlike Foo walked away from his own challenge. (This biography will provide, for the first time, a plausible and research-based solution to this otherwise puzzling outcome.) · Maker, in 1911, of Wuchang Uprising, considered by many to be China's first documentary. This daring and innovative war documentary, which played to rapt audiences in theaters across China, would play a significant role in rallying opposition to the Qing Dynasty and the founding of the Chinese Republic. · In the 1930s, more than a decade after his death, his impact on the evolution of the film industry would be acknowledged when the man who would become known as the father of film special effects-and an inspiration for George Lucas's Star Wars-would identify Foo as the man who mentored him in the field of optical illusion. Beyond all this-and there is more-perhaps the genial and charismatic Chinese conjurer's greatest legacy was in the area of cultural and person-to-person diplomacy. In the era of the uniquely discriminatory Chinese Exclusion Act, over a period of almost 20 years, Ching Ling Foo and his talented family, through the joyful and dignified presentation of their sheer talent, managed to introduce to an American public awash in very hostile representations involving opium, deceit, and vice, what was aptly termed a very "different picture."
Produktdetails
Produktdetails
Autorenporträt
Samuel Porteous is an award-winning Shanghai-based artist/author with close to 20 years of experience living and working in China. For the last ten years he has been Chief Creative Director of Drowsy Emperor; a small boutique design/content studio serving Chinese and Western audiences. Samuel's work focuses on the special place China holds in the Western imagination. His China analysis drawing on his earlier career as top China based corporate investigator and intelligence analyst has been published in the Wall Street Journal, Financial Times, South China Morning Post, Globe and Mail, and Hong Kong Standard among others. He is currently artist in residence at TanYuan Gardens. Samuel also wrote and illustrated the graphic novel series " Constable Khang's Mysteries of Old Shanghai" for the China market which will soon be released in North America.
Kundenbewertungen
Schreiben Sie eine Kundenbewertung zu diesem Produkt und gewinnen Sie mit etwas Glück einen 15,- EUR bücher.de–Gutschein!
Bewertung schreiben Bewertung schreiben
Bewertung schreiben Bewertung schreiben