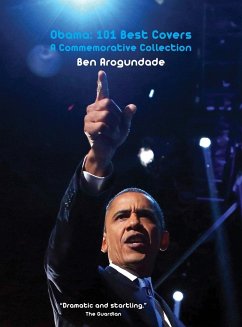 Andere Kunden interessierten sich auch für
Produktbeschreibung
Dramatic and startling - The Guardian Witness Barack Obama as you've never seen him before - as feminist, communist, fashion model, Jew, Muslim terrorist, Messiah, Superman, George Washington, President Roosevelt, Julius Caesar and Hindu deity Lord Shiva. Obama: 101 Best Covers shows America's ex-president in all these guises and more, on the front pages of the world's leading print publications. NEW BARACK PHOTO BIOGRAPHY During his two terms in the White House, former US President Barack Obama amassed more newspaper and magazine covers than any other in history. This new post-presidency legacy book brings you the best 101 examples from around the world, in a special commemorative edition celebrating the startling event that was the 2008 election of America's first African American leader. It presents a unique visual biography of the background and accomplishments of his historic presidential campaign. OBAMA & NEW YORK TIMES Featured titles within this definitive collection include TIME, Newsweek, Rolling Stone, Vogue, Vanity Fair, The New Yorker, Esquire, Ebony, Essence, Vibe, The Guardian and The New York Times, amongst others. Many of the covers featuring the 44th US president were flattering. He never looked better than when he featured on the front of The New York Times or Rolling Stone. (See pages 40 and 69 of the Obama book). DREAMS OF AUDACITY & HOPE Many Barack Obama biography and legacy books have been written by different authors in recent years. His autobiography, Dreams Of My Father, as well as his memoir, The Audacity Of Hope, detail Obama's life story better than any biography by another author could, while the photographic portraits offered in Obama books by Pete Souza and Peter Baker reveal the intimate access they had to the White House's first African American president during his two administrations. But this new legacy book enters the Barack Obama story in 2004 with his very first cover, for Black Enterprise, and then tracks Obama's US presidential campaigns and elections of 2008 and 2012 through a further 100 amazing covers. THE CALL OF HISTORY 2008 Amongst the print media, Barack Obama was a publishing sensation - a fact borne out by the volume of covers his portrait graced during his eight-year American presidency. They range from graphic illustrations to photographs of Obama giving speeches while on the campaign trail, right through to intimate studio portraits. Many depict him as the chosen one, the Messiah even. Obama was the one who, out of the many, answered the call of history many thought would never come, while exercising power that no other African American leader before him has ever wielded on the political and presidential stage. OBAMA: AN INTIMATE PORTRAIT IN WORDS The text for the Obama covers book discusses the design, typography, photography and political context of each cover portrait, bringing to life this unique portrait of the world's most famous man. BARACK: 4 COVERS FOR NO. 44 Obama: 101 Best Covers, is available in FOUR collectable editions, each with a different cover. As a souvenir, gift or inspirational Black History Month purchase for 2019, this is one the best Obama books with which to celebrate the former US president's tenure in the White House. NEW OBAMA BOOK: SUMMARY • Available in FOUR editions. • A bespoke souvenir - EIGHT years in the making. • Features amazing covers you've never seen before. ONLINE BOOK CATEGORIES 2018 Biography & Autobiography
Produktdetails
Autorenporträt
BEN AROGUNDADE is the author of ten works of contemporary literary fiction and non-fiction, including 'Black Beauty', his debut novel, 'The Sexual Language of Strangers', and 'Obama: 101 Best Covers'. 'Black Beauty' was honoured by the New York Public Library and became the subject of a three-part BBC documentary. Ben is one of eight children born in London to Nigerian immigrants who settled in the capital in 1961. He originally trained as an architect before diversifying into graphic design and freelance journalism, where he wrote features for a range of international publications. Alongside his written work Ben also works as a voiceover artist across commercials, documentaries and TV and radio dramas. ABOUT THE NEW BARACK OBAMA BIOGRAPHY 'Obama: 101 Best Covers' - eight years in the making - is a portrait of Obama's call to history, a unique collection of front pages of the United States first African American president during his 2008 and 2012 election campaigns, as well as his tenure in the White House. This special commemorative Obama book comes in four alternative covers. Discover more about Ben Arogundade's work at: www.whitelabelsbooks.com www.arogundade.com www.365positivity.com
Kundenbewertungen
Schreiben Sie eine Kundenbewertung zu diesem Produkt und gewinnen Sie mit etwas Glück einen 15,- EUR bücher.de–Gutschein!
Bewertung schreiben Bewertung schreiben