Accession to the EU

The cases of Turkey and Ukraine 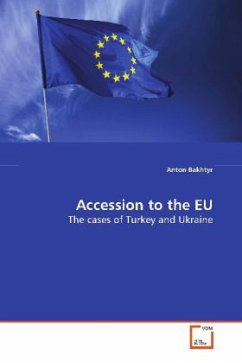 Accession to the EU

The cases of Turkey and Ukraine

Andere Kunden interessierten sich auch für
Produktbeschreibung
It would not be an overstatement to say that the EU
and its enlargements have defined the history of
Europe since the World War II. The EU has already
experienced five waves of enlargement and the process
has not been easy and straightforward. But the
enlargement is still on the EU agenda. The paper
deals with the process of enlargement of the EU and
with two particular cases of accession with the
case of Turkey and the case of Ukraine. During the
past enlargements the main logic behind the process
was the idea of Europe . But it seems like it is not
applicable to the cases of Ukraine and Turkey. Thus
new arguments in favour and against the accession of
these countries are put forward. These new arguments
involve the reassessment of the EU, its identity and
its role in the world. Therefore both cases are very
complex and multifaceted. The countries themselves
add to this complexity.
In the paper I study and compare the accession paths
of each country and the factors, which facilitate and
impede their accession. My conclusion is that both
countries would eventually join the EU, but the
process will take a long time, not least than 15-20
years from now.
Produktdetails
Autorenporträt
Anton Bakhtyr. MA in Political Science from the Central European
University (Budapest, Hungary). Post-graduate student at the
Kharkiv University of Humanities People s Ukrainian Academy ,
Ukraine.
Kundenbewertungen
Schreiben Sie eine Kundenbewertung zu diesem Produkt und gewinnen Sie mit etwas Glück einen 15,- EUR bücher.de–Gutschein!
Bewertung schreiben Bewertung schreiben