The Beasts of Electra Drive 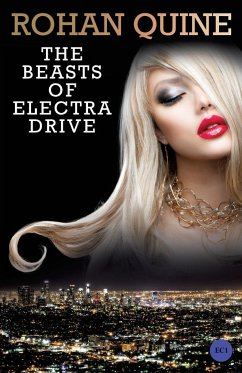 The Beasts of Electra Drive

From Hollywood Hills mansions and Century City towers, to South Central motels and the oceanside refinery, The Beasts of Electra Drive by Rohan Quine spans a mythic L.A., following seven spectacular characters (or Beasts) from games designer Jaymi's game-worlds. The intensity of those Beasts' creation cycles leads to their release into real life in seemingly human forms, and to their combative protection of him from destructive rivals at mainstream company Bang Dead Games. Grand spaces of beauty interlock with narrow rooms of terror, both in the real world and in the incorporeal world of…mehr

Andere Kunden interessierten sich auch für
Produktbeschreibung
From Hollywood Hills mansions and Century City towers, to South Central motels and the oceanside refinery, The Beasts of Electra Drive by Rohan Quine spans a mythic L.A., following seven spectacular characters (or Beasts) from games designer Jaymi's game-worlds. The intensity of those Beasts' creation cycles leads to their release into real life in seemingly human forms, and to their combative protection of him from destructive rivals at mainstream company Bang Dead Games. Grand spaces of beauty interlock with narrow rooms of terror, both in the real world and in the incorporeal world of cyberspace. A prequel to Quine's existing five tales (and a Finalist in the IAN Book of the Year Awards 2018), The Beasts of Electra Drive is a unique explosion of glamour and beauty, horror and enchantment, exploring the mechanisms and magic of creativity itself. Jaymi is an independent games designer living on Electra Drive in the Hollywood Hills. Opposed to him are his former colleagues at Bang Dead Games. Their mounting competitiveness regarding his own extravagant game-creation reaches a point where they attack him physically with a flying drone. Bang Dead is preparing the global release of a game called Ain'tTheyFreaky!, centring on five tabloid-flavoured social-media "Newsfeeds" for the victimisation of certain people by others-the "Gal Score", "Guy Score", "Trivia Score", "Arts Score" and "Cosy Score". Jaymi decides to fight back, for self-protection and to counteract this game's destructive effects. He takes an irrevocable step: after creating Amber, the most dangerous of the characters (or Beasts, as he calls them) who will populate Jaymi's project The Platinum Raven, he releases Amber from that game, such that Amber slithers out from Jaymi's computer monitor. Appearing human, this now-incarnated Beast is sent to stalk Ain'tTheyFreaky!'s creators in real life. While Amber terrorises them, Jaymi creates a second Beast, Evelyn, from his game The Imagination Thief. Incarnated too, she joins Amber in sabotaging a Bang Dead venture in the physical world. As Jaymi's output spawns three more titles, he jumps into the creation cycles and incarnations of five more human-seeming Beasts. Targeted by a more lethal drone attack, he decides his Beasts' missions must escalate: they will infiltrate the very substance of Ain'tTheyFreaky!. So Evelyn, Shigem and Kim sneak into one of the game's visual environments, where they try to put an end to some of its casually-programmed cruelty. Shigem and Kim shame two Bang Dead employees into secretly working for Jaymi instead. Five Beasts proceed to sabotage Ain'tTheyFreaky! at code level, turning its own server farm into a radically different environment. Their sabotage breaks the game down into its constituent glyphs and pixels-then electrifies these, recombining them into brand-new forms of such enchanted love and wickedness and originality that they'd certainly have been forbidden by Bang Dead. Amid the resultant conflict, a Beast is sent to kill a human; a Beast is arrested, before escaping and wreaking revenge; and another human is lashed to the transmitter tower above the Hollywood Sign, where… After the ensuing convulsions of destruction and violent creation, Jaymi's Beasts slip away to their appointed onscreen destinations, one by one; and he is left alone again, just as he was before he brought them into being. As he fires up his newly-completed game The Imagination Thief for the first time, however, it is clear that neither he nor the world around him will ever quite be as before.
Produktdetails
Autorenporträt
Rohan Quine is an author of literary fiction with a touch of magical realism and a dusting of horror. He grew up in South London, spent a couple of years in L.A. and then a decade in New York, where he ran around excitably, saying a few well-chosen words in various feature films and TV shows, such as Zoolander, Election, Oz, Third Watch, 100 Centre Street, The Last Days of Disco, The Basketball Diaries, Spin City and Law & Order: Special Victims Unit (see www.rohanquine.com/those-new-york-nineties/film-tv). He's now living back in East London, with his boyfriend and two happy free-roaming house rabbits - a white down-ears and a black up-ears. His novel The Beasts of Electra Drive (a Finalist in the IAN Book of the Year Awards 2018) is a prequel to his other five tales, and a good place to start. See www.rohanquine.com/press-media/the-beasts-of-electra-drive-reviews-media for reviews by Kirkus, Bookmuse, Bending the Bookshelf and others. From Hollywood mansions to South Central motels, havoc and love are wrought across a mythic L.A., through the creations of games designer Jaymi, in a unique explosion of glamour and beauty, horror and enchantment, celebrating the magic of creativity itself. In addition to its paperback format, his novel The Imagination Thief is available as an ebook that contains links to film and audio and photographic content in conjunction with the text. See www.rohanquine.com/press-media/the-imagination-thief-reviews-media for some nice reviews in The Guardian, Bookmuse, indieBerlin and elsewhere. It's about a web of secrets triggered by the stealing and copying of people's imaginations and memories, the magic that can be conjured by images of people, the split between beauty and happiness, and the allure of power. Four novellas - The Platinum Raven, The Host in the Attic, Apricot Eyes and Hallucination in Hong Kong - are published as separate ebooks, and also as a single paperback The Platinum Raven and other novellas. See www.rohanquine.com/press-media/the-novellas-reviews-media for reviews of these novellas, including by Iris Murdoch, James Purdy, Lambda Book Report and New York Press. Hunting as a pack, all four delve deep into the beauty, darkness and mirth of this predicament called life, where we seem to have been dropped without sufficient consultation ahead of time. All titles are also available in audiobook and video-book format, performed by the author. www.rohanquine.com
Kundenbewertungen
Schreiben Sie eine Kundenbewertung zu diesem Produkt und gewinnen Sie mit etwas Glück einen 15,- EUR bücher.de–Gutschein!
Bewertung schreiben Bewertung schreiben
Mehr zum Thema