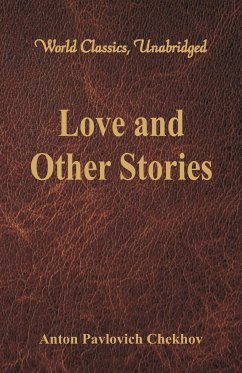 Anton Pavlovich Chekhov 29 January 1860 - 15 July 1904) was a Russian playwright and short story writer, who is considered to be among the greatest writers of short fiction in history.

Andere Kunden interessierten sich auch für
Produktbeschreibung
Anton Pavlovich Chekhov 29 January 1860 - 15 July 1904) was a Russian playwright and short story writer, who is considered to be among the greatest writers of short fiction in history.
Produktdetails
Autorenporträt
Anton Chekhov (1860-1904) was a Russian doctor, short-story writer, and playwright. Born in the port city of Taganrog, Chekhov was the third child of Pavel, a grocer and devout Christian, and Yevgeniya, a natural storyteller. His father, a violent and arrogant man, abused his wife and children and would serve as the inspiration for many of the writer's most tyrannical and hypocritical characters. Chekhov studied at the Greek School in Taganrog, where he learned Ancient Greek. In 1876, his father's debts forced the family to relocate to Moscow, where they lived in poverty while Anton remained in Taganrog to settle their finances and finish his studies. During this time, he worked odd jobs while reading extensively and composing his first written works. He joined his family in Moscow in 1879, pursuing a medical degree while writing short stories for entertainment and to support his parents and siblings. In 1876, after finishing his degree and contracting tuberculosis, he began writing for St. Petersburg's Novoye Vremya, a popular paper which helped him to launch his literary career and gain financial independence. A friend and colleague of Leo Tolstoy, Maxim Gorky, and Ivan Bunin, Chekhov is remembered today for his skillful observations of everyday Russian life, his deeply psychological character studies, and his mastery of language and the rhythms of conversation.
Kundenbewertungen
Schreiben Sie eine Kundenbewertung zu diesem Produkt und gewinnen Sie mit etwas Glück einen 15,- EUR bücher.de–Gutschein!
Bewertung schreiben Bewertung schreiben
Mehr zum Thema