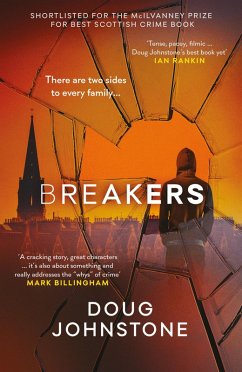 A pulsatingly tense psychological thriller and a breathtakingly brutal, beautiful and deeply moving story of a good kid in the wrong family, from one of Scotland's finest crime writers.
SHORTLISTED for the McIlvanney Prize for Scottish Crime Book of the Year
***BOOK OF THE YEAR in SCOTSMAN ***
'It's a lovely, sad tale, beautifully told and full of understanding' The Times
'The most powerful and moving book from Johnstone yet - a calling card that no-one can ignore' Scotsman
'This may be Doug Johnstone's best book yet. An unsparing yet sympathetic depiction of Edinburgh's…mehr

Andere Kunden interessierten sich auch für
Produktbeschreibung
A pulsatingly tense psychological thriller and a breathtakingly brutal, beautiful and deeply moving story of a good kid in the wrong family, from one of Scotland's finest crime writers.

'It's a lovely, sad tale, beautifully told and full of understanding' The Times

'This may be Doug Johnstone's best book yet. An unsparing yet sympathetic depiction of Edinburgh's ignored underclass, with terrific characterisation. Tense, pacey, filmic' Ian Rankin

There are two sides to every family...

Seventeen-year-old Tyler lives in one of Edinburgh's most deprived areas. Coerced into robbing rich people's homes by his bullying older siblings, he's also trying to care for his little sister and his drug-addict mum.

On a job, his brother Barry stabs a homeowner and leaves her for dead, but that's just the beginning of their nightmare, because the woman is the wife of Edinburgh's biggest crime lord, Deke Holt.

With the police and the Holts closing in, and his shattered family in devastating danger, Tyler meets posh girl Flick in another stranger's house, and he thinks she may just be his salvation ... unless he drags her down too.

'A cracking story, great characters ... it's also about something and really addresses the "whys" of crime' Mark Billingham

'It's as psychologically rich as it is harrowing. I've come to expect nothing less from Doug Johnstone, one of the genre's premiere writers' Megan Abbott

'Breakers again shows that Doug Johnstone is a noir heavyweight and a master of gritty realism. This may be his finest novel yet' Willy Vlautin

'Doug Johnstone is for me the perfect free-range writer, respectful of conventions but never bound by them, never hemmed-in. Each book is a different world, each book something new in this world' James Sallis

'A tough, gritty and effective ride into the dark side of Edinburgh' Douglas Skelton

'Pacy, harrowing and occasionally brutal ... it had me in tears at the end...' Paddy Magrane

'Both horrifying and uplifting, and one of those books I looked forward to picking up each time I had a moment to read ... I hope it does as well as it deserves to' James Oswald

'A brooding, intensely dark thriller with a defiant beating heart. Evocative, heartbreaking and hopeful - the power of the human spirit to shine in the most desperate place ... STUNNING' Miranda Dickinson

Produktdetails
Autorenporträt
Doug Johnstone is an author, journalist and musician based in Edinburgh. He's had nine novels published, most recently Fault Lines. His previous novel, The Jump, was a finalist for the McIlvanney Prize for Scottish Crime Novel of the Year. Several of his other novels have been award winners and bestsellers, and he's had short stories published in numerous anthologies and literary magazines. His work has been praised by the likes of Ian Rankin, Val McDermid, Mark Billingham and Irvine Welsh. Several of his novels have been optioned for film and television. Doug is also a Royal Literary Fund Consultant Fellow. He's worked as an RLF Fellow at Queen Margaret University, taught creative writing at Strathclyde University and William Purves Funeral Directors. He mentors and assesses manuscripts for The Literary Consultancy and regularly tutors at Moniack Mhor writing retreat. Doug has released seven albums in various bands, and is drummer, vocalist and occasional guitarist for the Fun Lovin' Crime Writers, a band of crime writers. He also reviews books for The Big Issue magazine, is player-manager for Scotland Writers Football Club and has a PhD in nuclear physics.