Linux in a Nutshell. A Desktop Quick Reference (Nutshell Handbook) 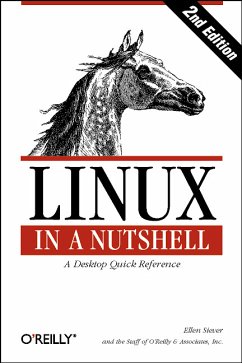 Linux in a Nutshell. A Desktop Quick Reference (Nutshell Handbook)

Produktbeschreibung
Linux in a Nutshell covers the core commands available on common Linux distributions. This isn't a scaled-down quick reference of common commands, but a complete reference containing all user, programming, administration, and networking commands.

- Commands with complete lists of options

This book also documents a wide range of GNU tools for UNIX users who have GNU versions of standard UNIX tools. You'll find all the essential commands you need to run your system, as well as all the commands that historically have been included on UNIX systems.

Linux in a Nutshell is a must for any Linux user; it weighs less than a stack of manual pages, but gives you everything you need for common, day-to-day use.