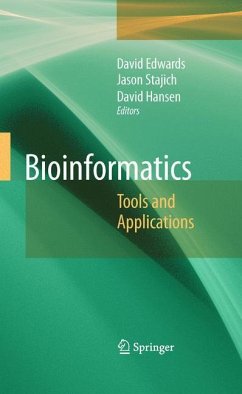 Bioinformatics is a relatively new field of research. It evolved from the requirement to process, characterize, and apply the information being produced by DNA sequencing technology. The production of DNA sequence data continues to grow exponentially. At the same time, improved bioinformatics such as faster DNA sequence search methods have been combined with increasingly powerful computer systems to process this information. Methods are being developed for the ever more detailed quantification of gene expression, providing an insight into the function of the newly discovered genes, while…mehr

Andere Kunden interessierten sich auch für
Produktbeschreibung
Bioinformatics is a relatively new field of research. It evolved from the requirement to process, characterize, and apply the information being produced by DNA sequencing technology. The production of DNA sequence data continues to grow exponentially. At the same time, improved bioinformatics such as faster DNA sequence search methods have been combined with increasingly powerful computer systems to process this information. Methods are being developed for the ever more detailed quantification of gene expression, providing an insight into the function of the newly discovered genes, while molecular genetic tools provide a link between these genes and heritable traits. Genetic tests are now available to determine the likelihood of suffering specific ailments and can predict how plant cultivars may respond to the environment. The steps in the translation of the genetic blueprint to the observed phenotype is being increasingly understood through proteome, metabolome and phenome analysis, all underpinned by advances in bioinformatics. Bioinformatics is becoming increasingly central to the study of biology, and a day at a computer can often save a year or more in the laboratory.

The volume is intended for graduate-level biology students as well as researchers who wish to gain a better understanding of applied bioinformatics and who wish to use bioinformatics technologies to assist in their research. The volume would also be of value to bioinformatics developers, particularly those from a computing background, who would like to understand the application of computational tools for biological research. Each chapter would include a comprehensive introduction giving an overview of the fundamentals, aimed at introducing graduate students and researchers from diverse backgrounds to the field and bring them up-to-date on the current state of knowledge. To accommodate the broad range of topics in applied bioinformatics, chapters have been grouped into themes: gene and genome analysis, molecular genetic analysis, gene expression analysis, protein and proteome analysis, metabolome analysis, phenome data analysis, literature mining and bioinformatics tool development. Each chapter and theme provides an introduction to the biology behind the data describes the requirements for data processing and details some of the methods applied to the data to enhance biological understanding.

Produktdetails
Autorenporträt
David Edwards gained an Honours degree in agriculture from the University of Nottingham in 1989 and a PhD from the Department of Plant Science, University of Cambridge, UK in 1997. He has held positions within academia (University of Adelaide, Australia; University of Cambridge, UK; and McGill University, Canada), government (Long Ashton Research Centre, UK, Department of Primary Industries, Victoria, Australia) and industry (ICI seeds, UK). David is currently a Principle Research Fellow at the University of Queensland, Australia and leads the bioinformatics group within the Australian Centre for Plant Functional Genomics. David's areas of interest include applied agricultural biotechnology; the structure and expression of plant genomes; the discovery and application of molecular genetic markers; and applied bioinformatics, with a focus on wheat, barley and Brassica crops. David Hansen has a Bachelor of Science in Chemistry from the University of Queensland, Brisbane and a PhD in statistical physics from Australian National University. After developing bioinformatics tools at the Wiezmann Institute of Science, Israel and European Bioinformatics Institute, Cambridge, David led the research and development of the SRS genomic data and tool integration software at LION bioscience in Cambridge from 1998 to 2004. David is now a Principal Research Scientist at the CSIRO Australian E-Health Research Centre and leads many research projects in e-Health aimed at improving the collection and use of information relevant to patient health. These research projects are in the areas of health data integration and clinical terminologies, biomedical imaging and remote patient monitoring. Jason Stajich earned a Bachelor of Science in Computer Science from Duke University in Durham, NC in 1999 and worked as a programmer for the Center for Human Genetics at Duke University Medical Center for two years assisting in building systems supporting human disease gene mapping research. He completed a PhD in Genetics and Genomics from Duke University in 2006 followed by postdoctoral training at the University of California, Berkeley on fellowship from the Miller Institute for Basic Research in Science. Jason is currently an Assistant Professor of Bioinformatics in the Department of Plant Pathology and Microbiology at the University of California, Riverside. Jason's research focuses on the evolution of fungi studying change at gene and genome scale among populations and across the kingdom employing computational and comparative approaches. He is interested in the emergence and evolution of pathogens and the evolution of development and forms in multicellular fungi.
Inhaltsangabe
DNA Sequence Databases.- Sequence Comparison Tools.- Genome Browsers.- Predicting Non-coding RNA Transcripts.- Gene Prediction Methods.- Gene Annotation Methods.- Regulatory Motif Analysis.- Molecular Marker Discovery and Genetic Map Visualisation.- Sequence Based Gene Expression Analysis.- Protein Sequence Databases.- Protein Structure Prediction.- Classification of Information About Proteins.- High-Throughput Plant Phenotyping - Data Acquisition, Transformation, and Analysis.- Phenome Analysis of Microorganisms.- Standards for Functional Genomics.- Literature Databases.- Advanced Literature-Mining Tools.- Data and Databases.- Programming Languages.
Rezensionen
From the reviews:

"This edited collection of articles will be a valuable addition to the aspiring computational biologist's bookshelf, covering a variety of traditional and advanced tools and methods for analyzing and storing biological data using computers. ... the plethora of references following each chapter will prove highly valuable. ... this collection of papers is very informative and helpful, both at an instructional and applied level, for beginners and advanced practitioners ... . Summing Up: Highly recommended. Upper-division undergraduate through professional collections." (D. Papamichail, Choice, Vol. 47 (10), June, 2010)

"This edited volume provides a systematic overview of the increasingly mature field of bioinformatics. ... The authors intend the volume both for biologists and computer scientists who are interested in learning more about the field. ... overall I think the book will achieve its aim of being a useful resource to both audiences, and would be an excellent choice for an advanced graduate course or reading group." (Todd Vision, The Quarterly Review of Biology, Vol. 85 (3), September, 2010)
Kundenbewertungen
Schreiben Sie eine Kundenbewertung zu diesem Produkt und gewinnen Sie mit etwas Glück einen 15,- EUR bücher.de–Gutschein!
Bewertung schreiben Bewertung schreiben
Mehr zum Thema