Recollections of My Nonexistence (eBook, ePUB) 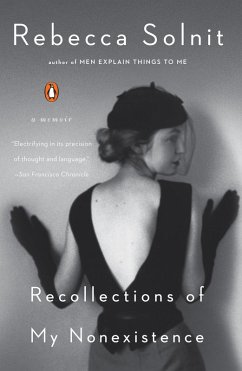 Recollections of My Nonexistence (eBook, ePUB)

"At the same time that [Solnit] describes her forays into her past, she invites us to connect pieces of her story to our own, as a measure of how far we've come and how far we have left to go." -Jenny Odell, The New York Times Book Review An electric portrait of the artist as a young woman that asks how a writer finds her voice in a society that prefers women to be silent In Recollections of My Nonexistence, Rebecca Solnit describes her formation as a writer and as a feminist in 1980s San Francisco, in an atmosphere of gender violence on the street and throughout society and the exclusion of…mehr

Andere Kunden interessierten sich auch für
Produktbeschreibung
"At the same time that [Solnit] describes her forays into her past, she invites us to connect pieces of her story to our own, as a measure of how far we've come and how far we have left to go." -Jenny Odell, The New York Times Book Review An electric portrait of the artist as a young woman that asks how a writer finds her voice in a society that prefers women to be silent In Recollections of My Nonexistence, Rebecca Solnit describes her formation as a writer and as a feminist in 1980s San Francisco, in an atmosphere of gender violence on the street and throughout society and the exclusion of women from cultural arenas. She tells of being poor, hopeful, and adrift in the city that became her great teacher, and of the small apartment that, when she was nineteen, became the home in which she transformed herself. She explores the forces that liberated her as a person and as a writer--books themselves; the gay community that presented a new model of what else gender, family, and joy could mean; and her eventual arrival in the spacious landscapes and overlooked conflicts of the American West. Beyond being a memoir, Solnit's book is also a passionate argument: that women are not just impacted by personal experience, but by membership in a society where violence against women pervades. Looking back, she describes how she came to recognize that her own experiences of harassment and menace were inseparable from the systemic problem of who has a voice, or rather who is heard and respected and who is silenced--and how she was galvanized to use her own voice for change.

Produktdetails
Autorenporträt
Rebecca Solnit is the author of more than twenty books, including A Field Guide to Getting Lost, The Faraway Nearby, AParadise Built in Hell, River of Shadows, and Wanderlust. She is also the author of Men Explain Things to Me and many essays on feminism, activism and social change, hope, and the climate crisis. A product of the California public education system from kindergarten to graduate school, she is a regular contributor to The Guardian and other publications.
Rezensionen
Named a Most Anticipated Book of 2020 by O, The Oprah Magazine; Vulture; Good Housekeeping; The Boston Globe; Chicago Tribune; Bitch Media; and The Millions

Much more than a feminist manifesto . . . Solnit movingly describes her efforts to fashion the self who will speak . . . There are phrases, such as women s stories, silencing, or gaslighting, that contemporary discourse has emptied out. Solnit revives these terms with the breath of their own histories. Katy Waldman, The New Yorker

"At the same time that [Solnit] describes her forays into her past, she invites us to connect pieces of her story to our own, as a measure of how far we've come and how far we have left to go." Jenny Odell, The New York Times Book Review

Throughout her rich body of work, essayist and critic Rebecca Solnit has revealed pieces of herself in writings about the beauty of getting lost, the joys of walking both for pleasure and with purpose, and perhaps most famously, the indignity of being mansplained to. At last, she uses her eagle eye to explore her own life. Recollections of My Nonexistence is a marvel: a memoir that details her awakening as a feminist, an environmentalist, and a citizen of the world. Every single sentence is exquisite. Maris Kreizman, Vulture

[A] splendid memoir of longings and determinations, of resistances and revolutions, personal and political, illuminating the kiln in which one of the boldest, most original minds of our time was annealed. Maria Popova, Brain Pickings

A clarion call of a memoir, chronicling, in unfettered, poetic prose, her coming-of-age . . . and her emergence as one of our most potent cultural critics. O, The Oprah Magazine

A resonant and moving portrait of how challenging life can be in the female body. Time, 100 Must-Read Books of 2020

A deeply intimate and deeply internal book about how Solnit became one of the defining feminist thinkers of the twenty-first century [and] a nostalgic love letter to the San Francisco of her youth . . . Solnit writes beautifully and with much compassionate nuance about how the threat of violence and not just its execution colors all parts of a woman s life, and how actual physical violence is just one of myriad ways that women are controlled, subjugated and silenced . . . This [book] is electrifying in its precision of thought and language. San Francisco Chronicle

Solnit has valiantly been making the case that misogynist speech and violence are on a spectrum for decades, long before mainstream acceptance of the idea . . . In Recollections of My Nonexistence, Solnit implies that just as the illness can be both dramatic and also cumulative, gradual, and imperceptible, so might be the cure. And things that feel insufficient writing, talking, walking, teaching do in fact represent tiny counterweights, which together shift the course of culture. NPR.org

For Solnit fans, her new memoir is a glimpse of all that was taking form out of sight, providing a key to understanding much of her work to date. Yet simply as a coming-of-age narrative, it also has much to offer someone new to her writing. [Recollections] often reverses the figure-ground relationship, portraying the emergence of a writer and her voice from a particular cultural moment and set of fortuitous influences . . . [It] often reads as a letter to young activists and women writers less back in my day and more I fought, and am fighting, the same battles you are. Jenny Odell, The New York Times Book Review

Solnit begins this book of personal and cultural explorations with the memory of looking in a mirror and seeing herself disappear. It s a fitting metaphor for a narrative that is as much a social history as it is a memoir, engaging questions of invisibility and silence and the way patriarchal forces seek to render women small. Los Angeles Times

Solnit emphasizes the need to find poetry in survival . . . [Recollections of My Nonexistence is] a voice raised in hope against gender violence. It s a call we should listen to. The Washington Post

It is a rare writer who has both the intellectual heft and the authority of frontline experience to tackle the most urgent issues of our time. One of the reasons [Solnit] has won so many admirers is the sense that she is driven not by anger but by compassion and the desire to offer encouragement . . . That voice of hope is more essential now than ever, and this memoir is a valuable glimpse into the grit and courage that enabled her to keep telling sidelined stories. The Guardian (London)

A brilliant memoir that is at once both of the moment and timeless . . . Recollections of My Nonexistence is all about liberation. And it invites us to think more broadly about what is possible in challenging times. John Nichols, The Progressive

A work of feminist solidarity, in which [Solnit] chooses to write not from herself alone, but for and about and often with the voices of other women talking about survival . . . What Solnit wants most is to talk about the obstacles her younger self found . . . She s concerned with the way women disappear, or are encouraged to abdicate their bodies and their vocation . . . [A] meditation on creativity, home, and an elusive self. 4Columns

[A] splendid memoir of longings and determinations, of resistances and revolutions, personal and political, illuminating the kiln in which one of the boldest, most original minds of our time was annealed. Maria Popova, BrainPickings

One of the more beautiful narratives I ve read. Ezra Klein, Vox

Rebecca Solnit s opposition to injustice in its many forms, and her relentless inquiry as a writer and reporter into a great range of issues racial injustice, nuclear weapons, indigenous rights, male hegemony have defined the outrage and politics of much of her generation. In Recollections of My Nonexistence she draws all these potent metaphors for inequity together into a moral stance that transcends the particulars of all her topics. This is a remarkable book smart, brave, edgy, insightful, and authentic. Barry Lopez

One of our foremost thinkers on womanhood explores the journey of her becoming in this deeply personal memoir about her youth in San Francisco. In her searing, sensitive voice, Solnit recalls the epidemic of violence against women . . . tracing her journey as a writer through her journey to speak out on behalf of women. Esquire

Activist and essayist Rebecca Solnit has long captured the discomforts and difficulties of modern womanhood . . . [I]n describing [her youth], she details how she found her voice as an advocate for herself and those around her. Time

Fantastic . . . Solnit generously offers the story of finding her voice exemplary as it is as just one of the tales 'waiting to be told' in feminism s twenty-first century. BUST

This powerful memoir reveals how Solnit s coming-of-age as a journalist and a woman in 1980s San Francisco shaped her as a writer and a feminist. She grapples with sexual harassment, poverty, trauma, and women s exclusion from the cultural conversation, while discovering punk rock and the LGBTQ+ community as safe havens. Her words have long empowered people who feel voiceless, and her latest book is no exception. Good Housekeeping

[Solnit] couches her own lived experience . . . within a larger exploration of contemporary womanhood and an unapologetically feminist, queer lens. While beautifully exercising her own literary voice, Solnit simultaneously poses the question: Who do we allow to characterize the female experience? And what needs to happen in order for that to change? Parade

An inquisitive, perceptive, and original thinker and enthralling writer . . . Solnit has created an unconventional and galvanizing memoir-in-essays that shares key, often terrifying, formative moments in her valiant writing life . . . [and] illuminates with piercing lyricism the body-and-soul dangers women face in our complexly, violently misogynist world . . . [A]n incandescent addition to the literature of dissent and creativity. Booklist (starred)

While misogyny and its effect on women s psyches is familiar territory for Solnit, as in her breakthrough 2014 essay collection, Men Explain Things To Me, here the prolific writer gets more personal than ever as she reflects upon her youth in 1980s San Francisco. AV Club

An engaging look at Solnit s life, which succeeds in giving voice to inequity caused by patriarchy . . . Her recollection of her feelings regarding violence and being silenced are particularly resonant . . . She knows who she is and which forces have shaped her . . . [and] realizes the power of naming inequity, violence, and oppression against women. Library Journal