Kid Innovators: True Tales of Childhood from Inventors and Trailblazers 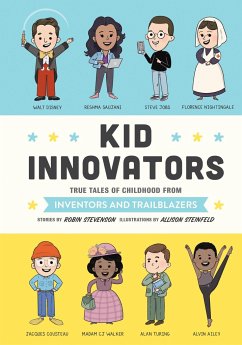 Kid Innovators: True Tales of Childhood from Inventors and Trailblazers

Andere Kunden interessierten sich auch für
Produktbeschreibung
Moving, funny, and totally true childhood biographies of Bill Gates, Madam C. J. Walker, Hedy Lamarr, Walt Disney, and 12 other international innovators.
Produktdetails
Autorenporträt
Robin Stevenson is an award-winning author of books for kids and teens, including Kid Activists. Her writing has been translated into several languages and published in more than 10 countries. She lives with her family on the west coast of Canada.

Allison Steinfeld obtained a BFA from the School of Visual Arts in New York City. She loves to create fun and playful work that can be enjoyed by readers of all ages. She lives in North Carolina.
Inhaltsangabe
Table of Contents

Kids will be drawn in. Chicago Parent, on Kid Activists by Robin Stevenson

The vivid details of each activist's story, combined with vibrant illustrations, demonstrate that every civil rights hero and popular firebrand started out as children, just like the rest of us. School Library Journal, on Kid Activists by Robin Stevenson

A great way to encourage kids who already love science to pursue their interests as well as to show kids who are not motivated by traditional schooling that there are many paths to greatness. American Scientist Magazine, on Kid Scientists by David Stabler

For your budding astrophysicist, inventor, doctor, environmentalist, or mathematician, Kid Scientists will open her eyes with mini-bios of interesting and accomplished people. Terri Schlichenmeyer, The Bookworm Sez, on Kid Scientists by David Stabler

A heartening reminder that 17 unconventional greats not to mention all the rest started out as children too. Kirkus Reviews, on Kid Artists by David Stabler

Just like history class, only hilarious. Tim Federle, author of Better Nate Than Ever, on Kid Presidents by David Stabler