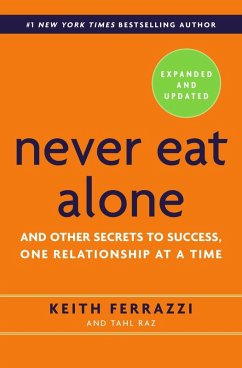 The bestselling business classic on the power of relationships, updated with in-depth advice for making connections in the digital world. Do you want to get ahead in life? Climb the ladder to personal success? The secret, master networker Keith Ferrazzi claims, is in reaching out to other people. As Ferrazzi discovered in early life, what distinguishes highly successful people from everyone else is the way they use the power of relationships-so that everyone wins. In Never Eat Alone, Ferrazzi lays out the specific steps-and inner mindset-he uses to reach out to connect with the thousands of…mehr

Andere Kunden interessierten sich auch für
Produktbeschreibung
The bestselling business classic on the power of relationships, updated with in-depth advice for making connections in the digital world. Do you want to get ahead in life? Climb the ladder to personal success? The secret, master networker Keith Ferrazzi claims, is in reaching out to other people. As Ferrazzi discovered in early life, what distinguishes highly successful people from everyone else is the way they use the power of relationships-so that everyone wins. In Never Eat Alone, Ferrazzi lays out the specific steps-and inner mindset-he uses to reach out to connect with the thousands of colleagues, friends, and associates on his contacts list, people he has helped and who have helped him. And in the time since Never Eat Alone was published in 2005, the rise of social media and new, collaborative management styles have only made Ferrazzi's advice more essential for anyone hoping to get ahead in business. The son of a small-town steelworker and a cleaning lady, Ferrazzi first used his remarkable ability to connect with others to pave the way to Yale, a Harvard M.B.A., and several top executive posts. Not yet out of his thirties, he developed a network of relationships that stretched from Washington's corridors of power to Hollywood's A-list, leading to him being named one of Crain's 40 Under 40 and selected as a Global Leader for Tomorrow by the Davos World Economic Forum. Ferrazzi's form of connecting to the world around him is based on generosity, helping friends connect with other friends. Ferrazzi distinguishes genuine relationship-building from the crude, desperate glad-handing usually associated with "networking." He then distills his system of reaching out to people into practical, proven principles. Among them: Don't keep score: It's never simply about getting what you want. It's about getting what you want and making sure that the people who are important to you get what they want, too. "Ping" constantly: The ins and outs of reaching out to those in your circle of contacts all the time-not just when you need something. Never Eat Alone: The dynamics of status are the same whether you're working at a corporation or attending a social event-"invisibility" is a fate worse than failure. Become the "King of Content": How to use social media sites like LinkedIn, Twitter, and Facebook to make meaningful connections, spark engagement, and curate a network of people who can help you with your interests and goals. In the course of this book, Ferrazzi outlines the timeless strategies shared by the world's most connected individuals, from Winston Churchill to Bill Clinton, Vernon Jordan to the Dalai Lama. Chock-full of specific advice on handling rejection, getting past gatekeepers, becoming a "conference commando," and more, this new edition of Never Eat Alone will remain a classic alongside alongside How to Win Friends and Influence People for years to come.

Produktdetails
Autorenporträt
KEITH FERRAZZI is founder and CEO of the training and consulting company Ferrazzi Greenlight and a contributor to Inc., the Wall Street Journal, and Harvard Business Review. Earlier in his career, he was CMO of Deloitte Consulting and at Starwood Hotels and Resorts, and CEO of YaYa Media. He lives in Los Angeles. TAHL RAZ has written for Inc. magazine, the Jerusalem Post, the San Francisco Chronicle, and GQ. Raz lives in New York City.
Rezensionen
Advance Praise for Never Eat Alone "Your network is your net worth. This book shows you how to add to your personal bottom line with better networking and bigger relationships. What a solid but easy read! Keith's personality shines through like the great (and hip) teacher you never got in college or business school. Buy this book for yourself, and tomorrow go out and buy one for your kid brother!" - Tim Sanders, author of Love Is the Killer App: How to Win Business and Influence Friends and leadership coach at Yahoo! "Everyone in business knows relationships and having a network of contacts is important. Finally we have a real-world guide to how to create your own high-powered network tailored to your career goals and personal style." - Jon Miller, CEO, AOL "I've seen Keith Ferrazzi in action and he is a master at building relationships and networking to further the interests of an enterprise. He's sharing his playbook for those who want learn the secrets of this important executive art." - Dr. Klaus Kleinfeld, CEO-designate, Siemens AG "A business book that reads like a story - filled with personal triumphs and examples that leave no doubt to the reader that success in anything is built on meaningful relationships." - James H. Quigley, CEO, Deloitte & Touche USA LLP "Keith has long been a leading marketing innovator. His way with people truly makes him a star. In Never Eat Alone , he has taken his gift and created specific steps that are easily followed, to achieve great success." - Robert Kotick, Chairman and CEO, Activision "Keith's insights on how to turn a conference, a meeting, or a casual contact into an extraordinary opportunity for mutual success make invaluable reading for people in all stages of their professional and personal lives. I strongly recommend it." - Jeffrey E. Garten, Dean, Yale School of Management…mehr
Kundenbewertungen
Schreiben Sie eine Kundenbewertung zu diesem Produkt und gewinnen Sie mit etwas Glück einen 15,- EUR bücher.de–Gutschein!
Bewertung schreiben Bewertung schreiben
Mehr zum Thema