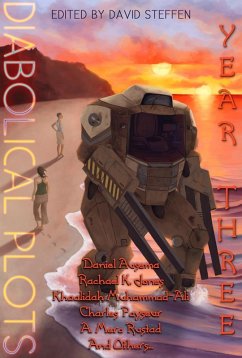 This anthology collects all 24 original stories from the third year of Diabolical Plots, an online magazine of science fiction and fantasy. Lovecraftian food bloggers, doors that bring back the dead, fantastical roommates apartment hunting in Brooklyn, oversea octopus explorers, sisterly love and rivalry in space, living breathing sweaters. The stories vary from humorous to tragic to thoughtful, from contemporary authors both new and established.
The stories in this anthology are: "Regarding the Robot Raccoons Attached to the Hull of My Ship" by Rachael K. Jones and Khaalidah Muhammad-Ali…mehr

The stories in this anthology are: "Regarding the Robot Raccoons Attached to the Hull of My Ship" by Rachael K. Jones and Khaalidah Muhammad-Ali "The Existentialist Men" by Gwendolyn Clare "The Things You Should Have Been" by Andrea G. Stewart "O Stone, Be Not So" by José Pablo Iriarte "For Now, Sideways" by A. Merc Rustad "The Entropy of a Small Town" by Thomas K. Carpenter "Six Hundred Universe of Jenny Zars" by Wendy Nikel "What Monsters Prowl Above the Waves" by Jo Miles "When One Door Shuts" by Aimee Ogden "Lightning Dance" by Tamlyn Dreaver "The Long Pilgrimage of Sister Judith" by Paul Starkey "The Shadow Over His Mouth" by Aidan Doyle "Shoots and Ladders" by Charles Payseur "The Leviathans Have Fled the Sea" by Jon Lasser "Strung" by Xinyi Wang "Soft Clay" by Seth Chambers "9 Things the Mainstream Media Got Wrong About the Ansaj Incident" by Willem Myra "The Aunties Return the Ocean" by Chris Kuriata "Monster of the Soup Cans" by Elizabeth Barron "Brooklyn Fantasia" by Marcy Arlin "Artful Intelligence" by G.H. Finn "Typical Heroes" by Theo Kogod "Three Days of Unnamed Silence" by Daniel Ausema "Hakim Vs. the Sweater Curse" by Rachael K. Jones