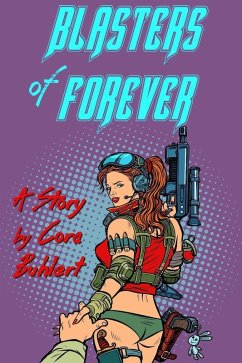 1985: Screenwriter Simon St. John makes his living writing toy tie-in cartoons and dreams of finally getting his screenplay " People on a Bridge" produced.
But one night, when Simon has just come up with his latest creation, a group of time travelling cops known as the Blasters of Forever, a portal opens inside his living room. Out of the portal hop none others than the Blasters of Forever or at any rate, people who look very much like them.
The Blasters explain that they are from the future, where Simon is considered not just one of the greatest creative minds of the twentieth century, …mehr

The Blasters explain that they are from the future, where Simon is considered not just one of the greatest creative minds of the twentieth century, but also the inspiration for the time travel program that eventually led to the formation of the Blasters of Forever.

This is a short story of 5500 words or approximately 20 print pages.

Produktdetails
Produktdetails
Autorenporträt
Cora Buhlert was born and bred in North Germany, where she still lives today - after time spent in London, Singapore, Rotterdam and Mississippi. Cora holds an MA degree in English from the University of Bremen and is currently working towards her PhD. Cora has been writing, since she was a teenager, and has published stories, articles and poetry in various international magazines. When she is not writing, she works as a translator and teacher.