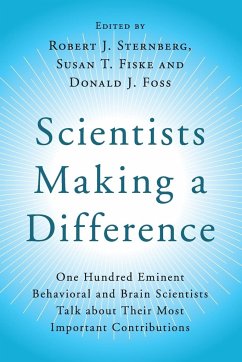 This book presents the most important contributions to modern psychological science and explains how the contributions came to be.

Andere Kunden interessierten sich auch für
Produktbeschreibung
This book presents the most important contributions to modern psychological science and explains how the contributions came to be.
Produktdetails
Autorenporträt
Sternberg, Robert J.
Robert J. Sternberg is Professor of Human Development at Cornell University, New York. Formerly, he was IBM Professor of Psychology and Education at Yale University, Connecticut. He won the 1999 James McKeen Cattell Fellow Award and the 2017 William James Fellow Award from APS. He is editor of Perspectives on Psychological Science. His main fields of interest are in intelligence, creativity, wisdom, ethics, love and hate. His PhD is from Stanford University, California and he has thirteen honorary doctorates. He is a member of the National Academy of Education and the American Academy of Arts and Sciences. Sternberg is the author of roughly 1600 publications and has been cited over 102,000 times with an h index of 154.

Fiske, Susan T.
Susan T. Fiske is Eugene Higgins Professor, Psychology and Public Affairs, Princeton University, New Jersey. She investigates cognitive stereotypes and emotional prejudices, culturally, interpersonally and neuro-scientifically.Her books include The HUMAN Brand: How We Relate to People, Products, and Companies (with Chris Malone, 2013), Envy up, Scorn down: How Status Divides Us (2011), and Social Cognition (with Shelley Taylor, 2013). She edits the Annual Review of Psychology, PNAS, and Policy Insights from Behavioral and Brain Sciences. She is past-President of the Federation of Associations in Behavioral and Brain Sciences, was elected to the National Academy of Sciences, and won Princeton University's Graduate Mentoring Award.

Foss, Donald J.
Don Foss is Professor of Psychology at the University of Houston and has served on the faculties of the University of Texas, Austin and Florida State University. His publications have focused on language processing, memory and student success. He has been editor, associate editor or board member of numerous publications, and also served as a department chair, dean and provost. Foss received an all-University Outstanding Teaching Award at the University of Texas, Austin, and an Outstanding Achievement Award from the University of Minnesota.
Inhaltsangabe
Part I. Introduction
Part II. Biological Bases of Psychology
Part III. Cognition
Part IV. Development
Part V. Motivation and Emotion
Part VI. Social and Personality Processes
Part VII. Clinical and Health Psychology.
Rezensionen
'In 100 autobiographical essays, psychology's preeminent contributors reveal the roots and fruits of their famed contributions. Here are stories for posterity, from the funding barriers that challenged Thomas Bouchard's study of reared-apart twins, to Michael Gazzaniga's exhilaration on discovering the wonders of human split-brains, to Carol Dweck's 'me-search' on how she and others could find a thriving mindset when facing obstacles. This is living history - and a great read for both psychological scientists and students.' David G. Myers, Hope College, Michigan
Kundenbewertungen
Schreiben Sie eine Kundenbewertung zu diesem Produkt und gewinnen Sie mit etwas Glück einen 15,- EUR bücher.de–Gutschein!
Bewertung schreiben Bewertung schreiben
Mehr zum Thema