Galaxies and How to Observe Them 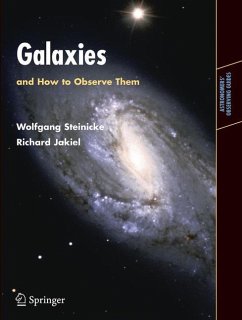 Galaxies and How to Observe Them

Galaxies are perhaps the most popular of all visual targets that are sought after by visual observers. At present the only way to get up-to-date information, is to query various (often highly technical) speciality books or digging deeply into the Internet. This can be a time consuming and often frustrating task, as the data aren't often compatible. This book satisfies the need for a modern, comprehensive review in combining the three major aspects: the physical background on the nature and data of galaxies, the relevant instrumentation and viewing techniques, and finally the targets and their…mehr

Andere Kunden interessierten sich auch für
Produktbeschreibung
Galaxies are perhaps the most popular of all visual targets that are sought after by visual observers. At present the only way to get up-to-date information, is to query various (often highly technical) speciality books or digging deeply into the Internet. This can be a time consuming and often frustrating task, as the data aren't often compatible. This book satisfies the need for a modern, comprehensive review in combining the three major aspects: the physical background on the nature and data of galaxies, the relevant instrumentation and viewing techniques, and finally the targets and their individual appearance in telescopes of various apertures. To illustrate the latter, a comprehensive sample of galaxies, including quasars, groups and clusters of galaxies is presented. This combination of theoretical knowledge and practical information guarantees successful observing sessions. The book could become a standard source on galaxy observing for all kinds of amateur observers, from the beginner to the experienced.This book is a unique work satisfying the need for a modern, comprehensive review of all major aspects of galaxy observation. It is the only book to specialize on visual observation of galaxies and will appeal to beginners and experienced stargazers alike.

Produktdetails
Autorenporträt
Wolfgang Steinicke: www.klima-luft.de/steinickeamastro: deep sky observation mailing list (US) I've been a visual observer since I was 10. I started early to collect literature and data on various deep-sky objects (Messier, NGC, and IC), especially galaxies. My preference for science led me to study physics and mathematics in Aachen and Freiburg, Germany, later specialising in relativistic astrophysics and general relativity. Since 1976 I'm a member of several astronomical organisations. In 1984 an amateur observatory was build on the Schauinsland near Freiburg at 1250 m. With its 14-inch Schmidt-Cassegrain, and now complimented with a 20" Dobsonian, I have observed a wide variety of deep sky objects including galaxies, quasars and groups of galaxies. I have also published observing catalogues of the latter classes ("Catalogue of Bright Quasars and BL Lacertae Objects" and "Catalogue of Galaxy Groups"). My long-term interest in deep sky data led to the compilation of the "Revised New General and Index Catalogue", first published in 1996. At present I'm a staff member of the "Institute for the History of Science" at Hamburg University, Fellow of the "Royal Astronomical Society" (F.R.A.S.), council member of the "Webb Deep Sky Society" (and director of the "Nebulae & Cluster" section), core team member of the international "NGC/IC Project", head of the section "Geschichte der Astronomy" of the German "Vereinigung der Sternfreunde" (being also their vice-president), member of the "Arbeitskreis Astronomiegeschichte" of the "Astronomische Gesellschaft", editor of the "Journal für Astronomie", and editorial staff member of the magazine "Interstellarum". I'm author of many papers in German and international magazines, of the "Praxishandbuch Deep Sky" (Kosmos) and the monograph "Extragalactic Objects Discovered as Variable Stars" (published by the Webb Deep Sky Society). Rich Jakiel: My interest in astronomy dates back to my youth in the 1960's, as I had a keen interest in the race to the Moon. Under the dark skies of Western New York, I started out by learning the constellations and using my father's binoculars to find the brighter Messier objects. In 1974, I bought my first real telescope - a 4 1/2-inch reflector and soon I was hunting down all the Messier list and brighter NGC objects. In 1978, I purchased an 8-inch homebuilt telescope that I used to study the structure of bright galaxies such as M51, plus it allowed for detailed study of the planets. In 1987, I had moved to Atlanta, GA. to take a teaching position. After joining the local astronomy club, I soon had access to much larger and more sophisticated telescopes than what I had in New York. Using the AAC's 20 and 24-inch telescopes, plus my own 17.5-inch Dobsonian, I greatly expanded the range and depth of my observing programs. Currently I have observed well over 5000 galaxies, and I specialise in the visual study of unusual/peculiar, interacting and active galaxies. I have sketched nearly 1200 galaxies, and in 1996 was presented the Webb Society's Graphics Award for my work. I have given numerous presentations and workshops on Drawing at the Eyepiece for many regional and national star parties. Presently, I am a research scientist working for The State of Georgia's Radiation Protection Program. Over the past twenty years, I have contributed over 50 astronomy articles to magazines and journals that include Sky & Telescope, Astronomy, Deep Sky Observer (DSO), The Strolling Astronomer (ALPO), Astronomie Heute, Magellan, Amateur Astronomy, plus numerous descriptions and drawings for the Night Observer's Guide. I have taught astronomy and physics at the University of West Georgia (1997-2002), and I am currently the director of the Webb Society's Galaxy Section. I am also a member of the Association of Lunar and Planetary Observers (ALPO), the Astronomical League (AL),
Inhaltsangabe
Galaxies, Cluster of Galaxies, and their Data.- Galaxies, Cluster of Galaxies & their data.- Pairs, Groups, and Clusters of Galaxies.- Catalogs, Data, and Nomenclature.- Technical Aspects on Observing Galaxies.- Accessories and Optical Quantities.- Theory of Visual Observation.- Observing, Recording, & Processing.- What to Observe? - The Objects.- Observing Programs.- Individual Objects.- Groups and Clusters of Galaxies.- Odd Stuff.
Rezensionen
From the reviews:

"The Springer series Astronomers' Observing Guides is a bit of a mixed-bag, with some books much better than others; this is certainly one of the better ones. ... The book is well illustrated with images of galaxies, many in colour ... . Numerous references are given; in fact there are more references in this book than in many academic ones. In summary, this is an excellent book which I have no hesitation in recommending. Even experienced observers will find much useful information in its pages." (Stewart L. Moore, The Observatory, Vol. 127 (1200), October, 2007)

"This guide for amateur astronomers is one in a series of 'Astronomers' Observing Guides.' ... The text contains a wealth of detailed information valuable to the serious amateur ... . The appendix gives useful lists of books, magazines, sky mapping software, Internet databases and links, as well as footnoted references. Many of the beautiful color photographs used throughout were taken with some of the world's best telescopes ... . Summing Up: Recommended. General readers." (M. Dickinson, CHOICE, Vol. 44 (11), July, 2007)