Mercury in the Context of its Environment 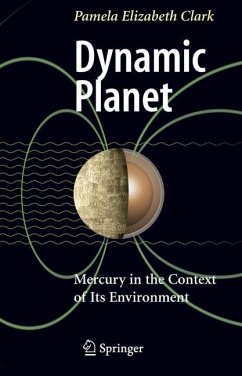 Mercury in the Context of its Environment

Andere Kunden interessierten sich auch für
Produktbeschreibung
This book views Mercury as a whole in the context of its environment. It illustrates what we know and what we need to know, and why understanding Mercury is so crucial to our understanding of solar system origin and current processes on Earth. The book describes our current state of knowledge for Mercury and interactions between interior, exterior, and space environment which are highly dynamic and thus critical to understanding Mercury as a system.

Produktdetails
Autorenporträt
Pamela Clark grew up in New England and, inspired by President John Kennedy, decided she wanted to explore outer space by the time she was thirteen years old. She was encouraged by several teachers, including her sixth grade teacher, Ed Vandall, and high school biology teacher, Robert Blake, as well as by Werner von Braun. She thought, "If they can put a man on the moon, they can put a woman (me) on Mars!" So, she left home to seek her fortune in the space program. She obtained her BA from St. Joseph College, a tiny Catholic women's college run by the Sisters of Mercy in West Hartford, Connecticut. There, she had many opportunities to participate in laboratory research with Sr. Chlorophyll (Dr. Claire Markham) and Sr. Moon Rock (Dr. Mary Ellen Murphy) and to coordinate an NSF inter-disciplinary undergraduate field research project. While obtaining her PhD in planetary geochemistry from the University of Maryland, she worked at GSFC/NASA outside of Washington DC and the Astrogeology Branch of the USGS in Flagstaff, Arizona, simulating, analyzing, correlating, and interpreting lunar X-ray spectra. She was a member of the group, led by Isidore Adler and Jack Trombka, that pioneered the use of orbital x-ray and gamma-ray spectrometers to determine the composition of planetary surfaces. She participated in the Flagstaff Lunar Data Consortium, the first attempt to create a common format for all remote sensing data for a planetary body. After completing her PhD, she joined the technical staff at NASA/JPL outside of Los Angeles for awhile, working with the Ray Jurgens of the Goldstone Solar System Radar group, and expanding her remote sensing background to include radar and thermal and near infrared studies of planetary surfaces with particular emphasis on the study of the physical nature of Mercury's surface. Dr. Clark helped to organize a consortium of scientists interested in Mercury and edits the Mercury Messenger newsletter. She eventually returned Goddard as a member of the XGRS team on the NEAR mission to asteroid Eros. Currently, as a member of the sciences and exploration division at GSFC, Dr. Clark is the science lead in a group initiated by Steve Curtis to develop new paradigms for the design of space missions and vehicles. She provides science support for the Magnetosphere Multi-Scale Mission, and continues to study the Moon, asteroids, and Mercury. Dr. Clark has done several stints in academic institutions, including Murray State University in Kentucky, Albright College in Reading, Pennsylvania, and Catholic University in Washington DC. She has developed courses in analytical and environmental chemistry, geochemistry, physical geology, mineralogy, optics, planetary astronomy, remote sensing, and physics. A space scientist by day, Dr. Clark is otherwise engaged in prison ministry, or in writing about or giving workshops in her wide-ranging fields of interest, including oral and local history, genealogy, Irish history, Celtic spirituality, herb gardening, and cooking. One of her major goals in life is to increase the awareness and the sense of wonder about the planet Mercury. Information about her work can be found at http://www.lpi.usra.edu/publications/newsletters/mercmessenger/ or http://ants.gsfc.nasa.gov
Inhaltsangabe
Mercury From a Systems Perspective.- Past and Planned Missions to Mercury.- Mercury's Interior.- Mercury's Surface.- Mercury' Exosphere.- Mercury's Magnetosphere.- The Future of Mercury Exploration.
Rezensionen
From the reviews:

"Dynamic Planet is a landmark publication, clearly detailing observations and theories of Mercury and its environment and setting the scene for future work. Every chapter is concise and clearly focused, and the text is complemented by a series of well-selected illustrations. This excellent book will populate the shelves of many scientists interested in Mercury or involved in missions to the planet." (Alan Wood, EOS, Vol. 90 (21), May, 2009)
Kundenbewertungen
Schreiben Sie eine Kundenbewertung zu diesem Produkt und gewinnen Sie mit etwas Glück einen 15,- EUR bücher.de–Gutschein!
Bewertung schreiben Bewertung schreiben
Mehr zum Thema