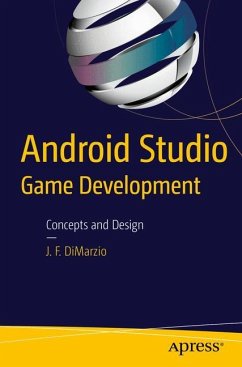 This short book walks you through the process of creating mobile games using the new Android Studio IDE. Android Studio Game Development introduces you to the key tools in Android Studio and gives you the knowledge you need to develop games in Android Studio.
This book takes you from installing Android Studio, through exploring the IDE to creating a new project and setting up GitHub as a VCS. You'll then be well equipped to tackle the game-development topics that make up the rest of the book. You'll learn about OpenGL ES and how to deal with polygons, before mastering image loading and…mehr

This book takes you from installing Android Studio, through exploring the IDE to creating a new project and setting up GitHub as a VCS. You'll then be well equipped to tackle the game-development topics that make up the rest of the book. You'll learn about OpenGL ES and how to deal with polygons, before mastering image loading and sprite sheets.

Produktdetails
Autorenporträt
J. F. DiMarzio is a seasoned Android developer and author. He began developing games in Basic on the TRS-80 Color Computer II in 1984. Since then, he has worked in the technology departments of companies such as the U.S. Department of Defense and the Walt Disney Company. He has been developing on the Android platform since the beta release of version .03, and he has published two professional applications and one game on the Android Marketplace. DiMarzio is also an accomplished author. Over the last 14 years, he has released 12 books, including Android: A Programmer's Guide. His books have been translated into five languages and published worldwide. DiMarzio's writing style is very easy to read and understand, which makes the information in the topics that he presents more retainable.
Inhaltsangabe
Chapter 1 Installing Android StudiooThis chapter walks the reader through downloading Android Studio, setting up their Java Path if needed, and setting up the Android SDK.  The reader will get to see step by step what options to set when installing and configuring Android Studio for the first time, and they will be introduced to Android Studio's Tip of the Day. Chapter 2 Exploring the IDEoChapter 2 takes the reader on a tour of the IDE.  The reader will learn what the different windows and views that make up Android Studio represent, and how to effectively use them when developing code.   Chapter 3 Creating a new projectoIn this chapter, the reader creates a new project from scratch using Android Studio.  This project will be used throughout the remainder of the book.   Chapter 4 Setting up Git hub as your VCSoIn Chapter 4, the reader learns how to set up Git hub as their versioning control system (VCS).  The chapter will lay out for the reader, step by step, how to create a Git hub login, and then use that information to set up Android Studio's VCS.  Once Git hub is set up, the reader will commit and download code. Chapter 5 Intro to Game DevelopmentoChapter 5 walks the reader through the basic theory of game development, focusing mainly on what is a game loop and how to construct one.  The reader builds their first game loop in this chapter and will add to it as the book progresses. Chapter 6 OpenGL ES and Polygons oThe reader learns how use OpenGL ES to create polygons in Chapter 6.  Polygons are the base for all in game objects, and understanding how polygons are constructed and displayed to the screen is essential to create a game. Chapter 7 Loading images and sprite sheetsoIn Chapter 7 the reader learns how to easily load images to the screen with OpenGL ES and polygons using textures.  Building on Chapter 6, this chapter teaches the reader how to map images onto polygons to display them in the game.  At the end of the chapter that reader using this
Rezensionen
"Android Studio game development, a self-described mini-book of 95 pages (excluding the front matter), is a recent arrival to the scene. ... The book teaches how to load images, and very briefly how to respond to user input and the basics of collision detection. ... this mini-book can only be recommended to programmers with some previous experience in game development, maybe not in Android, and who know nothing about OpenGL ES." (Hector Antonio Villa-Martinez, Computing Reviews, March, 2017)