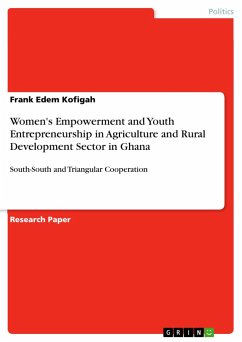 Andere Kunden interessierten sich auch für
Produktbeschreibung
Research Paper (postgraduate) from the year 2016 in the subject Politics - International Politics - Topic: Development Politics, Mohammed V University at Agdal (Institut des Etudes Africaines (IEA), Mohammed V University-Rabat), course: Development Economics and Politics, language: English, abstract: Formerly noted for their mothering roles (Deckard, 1983), Sub-Saharan African women in agriculture, especially those in Ghana are gradually defying the odds to become sustainers of their homes despite their meagre income (Heintz, 2005; ILO Geneva, 2011). Nonetheless, the major difficulty they face in the agricultural sector, is that of lack of finance, of which the creation of an enabling and conducive environment will lead to their true empowerment, hence, reinforce their economic capabilities (Sen, 2003). However, their much younger counterparts, the youth, as much as they are encouraged to go into agriculture, tend to rather reel under their "Achilles heel", thus, engage in their unabated exodus from rural areas to urban centers in search of non-existent jobs.

This paper, admonishes the sensitization of the former in a bid to ensure their entrepreneurship, and by so doing, promote rural development. For purposes of methodology, the paper has been duly divided into two major parts, of which the first part talks about women's empowerment, whereas, the second part deals with youth entrepreneurship in agriculture and the rural development sector.