The Great Suppression: Voting Rights, Corporate Cash, and the Conservative Assault on Democracy 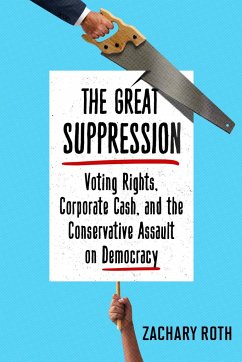 The Great Suppression: Voting Rights, Corporate Cash, and the Conservative Assault on Democracy

A New York Times Book Review Editor's Choice Finalist for the J. Anthony Lukas Book Prize
In the wake of Donald Trump's victory in the 2016 presidential election, a deeply reported look inside the conservative movement working to undermine American democracy.
Donald Trump is the second Republican this century to triumph in the Electoral College without winning the popular vote. As Zachary Roth reveals in The Great Suppression , this is no coincidence. Over the last decade, Republicans have been rigging the game in their favor. Twenty-two states have passed restrictions on voting.…mehr

In the wake of Donald Trump's victory in the 2016 presidential election, a deeply reported look inside the conservative movement working to undermine American democracy.

Donald Trump is the second Republican this century to triumph in the Electoral College without winning the popular vote. As Zachary Roth reveals in The Great Suppression, this is no coincidence. Over the last decade, Republicans have been rigging the game in their favor. Twenty-two states have passed restrictions on voting. Ruthless gerrymandering has given the GOP a long-term grip on Congress. Meanwhile, the Supreme Court has eviscerated campaign finance laws, boosting candidates backed by big money.

It would be worrying enough if these were just schemes for partisan advantage. But the reality is even more disturbing: a growing number of Republicans distrust the very idea of democracy and they re doing everything they can to limit it.

In The Great Suppression, Roth unearths the deep historical roots of this anti-egalitarian worldview, and introduces us to its modern-day proponents: The GOP officials pushing to make it harder to cast a ballot; the lawyers looking to scrap all limits on money in politics; the libertarian scholars reclaiming judicial activism to roll back the New Deal; and the corporate lobbyists working to ban local action on everything from the minimum wage to the environment. And he travels from Rust Belt cities to southern towns to show us how these efforts are hurting the most vulnerable Americans and preventing progress on pressing issues.

A sharp, searing polemic in the tradition of Rachel Maddow and Matt Taibbi, The Great Suppression is an urgent wake-up call about a threat to our most cherished values, and a rousing argument for why we need democracy now more than ever.

Produktdetails
Autorenporträt
Zachary Roth is a national reporter for MSNBC. He was born and raised in London and lives with his family in Brooklyn.
Rezensionen
"This important new book offers a comprehensive look at Republicans strategies to tilt elections their way, including gerrymandering and voter ID laws."
The New York Times Book Review, Editors' Choice

"A scathing indictment of Republican efforts to undermine democracy [The Great Suppression] brings together the big picture of what we are witnessing today in a way that hasn t been articulated before."
Washington Monthly

"At stake in the outcome of the 2016 presidential election, it seems obvious to many observers, is the future of democracy itself. Like so much else surrounding this remarkable race, however, Trump s threats against democracy, far from being unprecedented, fit perfectly in line with the party that nominated him. As Zachary Roth documents in The Great Suppression, Republicans, who rarely devote much time to policy, are rather zealous about politics and are especially eager to deprive their opponents of the right to vote. Alan Wolfe, The New Republic

"[Roth] includes the voter ID laws and disenfranchisement that grab headlines today, but the bigger story in The Great Suppression is one of a creative and increasingly desperate group of conservative scholars and politicians...A vital survey.
Vann Newkirk, The New York Times Book Review

"Roth s book tells compelling stories about disturbing conservative agendas that every progressive should know, and that not only will make those on the left mad but hopefully mobilized into political action."
The Atlantic

"A blistering account of concerted Republican efforts to quiet the political voices of minorities, students, and the poor Roth's succinct, well-written report examines disparate events and rulings of the past decade, arguing that conservative efforts to thwart the popular will have gone beyond partisan politics and are dismissive of the democratic process Solid reporting combined with engaging stories."
Kirkus Reviews, starred

"[Roth's] book should be required reading for understanding the ultimate goals of American conservatism."
Publishers Weekly

"Conservative activists have made it easier to buy an election and harder to vote in one. This gutting of democracy is the most important yet overlooked development in American politics, and Roth captures it with great skill in this timely and essential book."
Ari Berman, author of Give Us the Ballot: The Modern Struggle for Voting Rights in America

"Zachary Roth has written a pithy, passionate, substantive and readable cri de coeur detailing the multiple assaults on fundamental American democracy, from voter suppression laws to campaign finance, judicial activism and state usurpation of local autonomy. It is extraordinarily timely and a valuable addition to a needed literature on American political dysfunction."
Norm Ornstein, resident scholar, American Enterprise Institute, and co-author of It's Even Worse Than It Looks: How the American Constitutional System Collided With the New Politics of Extremism

"A briskly written, provocative, and alarming chronicle of key developments in our recent political history. Its signature strength is to identify the actors who hatched and promoted policies that chip away at democratic institutions and practices."
Alexander Keyssar, Professor of History and Social Policy, Harvard University, and author of The Right to Vote: The Contested History of Democracy in the United States

"Even if you think you know how badly popular sovereignty has been eroded in America, The Great Suppression will shock you. Zachary Roth s book about the deliberate campaign to transform our democracy into an oligarchy is lucid and compelling, and could hardly be more urgent."
Michelle Goldberg, Slate columnist and author of Kingdom Coming: The Rise of Christian Nationalism

"A riveting look at the project of putting American political democracy in a straitjacket and throwing it into the back seat for a right-wing joyride. Every page in this book screams out that it s time to take our democracy back." Jamie Raskin, Maryland State Senator and Professor of Constitutional Law, American University

"By weaving together lesser known aspects of American history going back to the founding, the politics of today, and real stories, Roth exposes the troubling state of American democracy. He demonstrates the vast range of tactics conservative elites are using to silence Americans voices and skew public policy in favor of the one percent. But he also lifts up recent successes in expanding voting rights and reducing money in politics, suggesting hope for a path forward." Tova Wang, author of The Politics of Voter Suppression: Defending and Expanding Americans Right to Vote

"In this astute book, Zachary Roth pulls together seemingly disparate trends in our politics from new voter-ID laws to the super-PAC free-for-all to present a persuasive account of what democracy looks like to the modern American right."
Sasha Issenberg, author of The Victory Lab: The Secret Science of Winning Campaigns

"America is less democratic than we'd like to think, and it s getting even worse--that's the inescapable takeaway of The Great Suppression. Zachary Roth deftly reveals how a well organized and determined minority have used restrictive voting measures and legal challenges designed to obliterate longstanding laws and to subvert the democratic process. A jarring and important read."
Daniel Schulman, author of Sons of Wichita: How the Koch Brothers Became America s Most Political and Private Dynasty

"Zachary Roth exposes widespread, under-reported, and dangerous machinations to disenfranchise voters and undermine our democracy, including attempts to rig the Electoral College. Thankfully, as Roth reports, the tide is turning. I urge you to read this troubling yet hopeful book." Wendell Potter, former health insurance executive and co-author of Nation on the Take: How Big Money Corrupts Our Democracy and What We Can Do About It…mehr
Kundenbewertungen
Schreiben Sie eine Kundenbewertung zu diesem Produkt und gewinnen Sie mit etwas Glück einen 15,- EUR bücher.de–Gutschein!
Bewertung schreiben Bewertung schreiben
Mehr zum Thema