The Science and Practice of Lithium Therapy 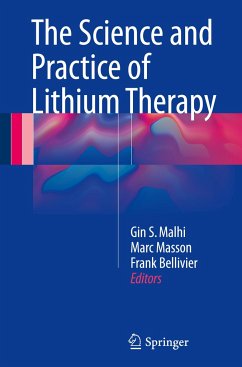 The Science and Practice of Lithium Therapy

This book provides a clear and comprehensive guide to the clinical prescription of lithium that draws upon evidence-based knowledge of its mechanisms of action. The book is divided into two parts, on the science of lithium and the practice of lithium therapy. The former covers aspects such as the properties of the lithium ion, pharmacokinetics and pharmacodynamics, impact on neurotransmission, and gene expression modulation. The section on practice includes discussion of variability in response to lithium, use of lithium in the treatment of bipolar disorders, its value in suicide prevention,…mehr

Andere Kunden interessierten sich auch für
Produktbeschreibung
This book provides a clear and comprehensive guide to the clinical prescription of lithium that draws upon evidence-based knowledge of its mechanisms of action. The book is divided into two parts, on the science of lithium and the practice of lithium therapy. The former covers aspects such as the properties of the lithium ion, pharmacokinetics and pharmacodynamics, impact on neurotransmission, and gene expression modulation. The section on practice includes discussion of variability in response to lithium, use of lithium in the treatment of bipolar disorders, its value in suicide prevention, administration during pregnancy and in the pediatric age group, and side effects. Lithium is arguably the only true mood stabilizer, and its multifaceted effects across many clinical domains have given rise to a resurgence of interest in recent years, fuelled by both researchers and clinicians. Nevertheless, its use remains constrained by exaggerated concerns about potential side-effects. In reality, lithium is a simple molecule that is relatively straightforward to administer and monitor and has potentially profound benefits at a fraction of the cost of contemporary agents. This book dispels the many myths and concerns that surround its use and will be of interest for clinicians and researchers worldwide, and those that are recipients of lithium therapy.

Produktdetails
Autorenporträt
Gin S. Malhi, BSc Hons), MBChB, FRCPsych, FRANZCP, MD is Professor of Psychiatry and Chair in the Faculty of Medicine at the University of Sydney. He is Department Head at Royal North Shore Hospital where he is Director of the CADE Clinic, and Medical Director of the Mood Disorders Unit at Northside Clinic, Sydney. After graduating with degrees in Pharmacology and Medicine from the University of Manchester (UK), he completed his psychiatry training in Cambridge and then the Bethlem and Maudsley Hospitals in London. As a Clinical Lecturer at the Institute of Psychiatry (IOP) in London he pursued research in depression and psychosurgery, and upon moving to Sydney (Australia) in 1999 he began research in neuroimaging and bipolar disorder at the University of New South Wales (UNSW). Since 2003 he been a Chief Investigator on successive National Health Medical Research Council (NHMRC) Program Grants and during this time he has published more than 400 papers and 20 books/book chapters. After serving as Editor-in-Chief of Acta Neuropsychiatrica he has been the Editor-in-Chief of the Australian and New Zealand Journal of Psychiatry since 2010 and is now also an Editor of Bipolar Disorders. In 2013 he received the Royal Australian and New Zealand College of Psychiatrists (RANZCP) Senior Academic Researcher Prize, and then in 2015 the RANZCP College Citation, and in the same year the Mogens Schou Award from the International Society of Bipolar Disorders for Education and Teaching. In 2016, in recognition of his many achievements, he received the Distinguished Professor Award from the University of Sydney. Marc Masson, MD, is a Psychiatrist and the Medical Director of the Nightingale Hospital Paris-Clinique du Château de Garches and Consultant, Service Hospitalo-Universitaire, Centre Hospitalier Sainte-Anne, Paris, France. After graduating from Bordeaux University in France, he worked as a psychiatrist at Assistance Publique Hôpitaux de Paris (APHP). He has served as General Secretary of The Société Médico-Psychologique and Editor-in-chief Assistant of The Annales Médico-Psychologiques and is now the Editor-in-Chief of L'Encéphale. His main areas of interest are bipolar disorders, psychopharmacology, neuropsychiatry and the history of psychiatry, and has published 4 books and 45 papers. Frank Bellivier MD, PhD is Professor of Adult Psychiatry at University Denis Diderot in Paris, and Head of the Departments of Psychiatry and Addiction at Saint-Louis - Lariboisière - F. Widal hospitals in Paris. He is also director of a research team on neuropsychopharmacology of bipolar disorders and addictions at the Institut National de la Santé et de la Recherche Médicale (INSERM UMRS_1144, www.umrs1144.com). He received his medical degree at the University of Paris (René Descartes). There, he also completed his residency training and a PhD in Neurosciences, before undertaking a research fellowship at Pitié-Salpêtrière Hospital, Paris. He has led several large clinical programmes for patients with mood disorders, including the Early Onset Bipolar Disorders Program, funded by INSERM and the Assistance Publique Hôpitaux de Paris (APHP). Since 2007, he has led collaborative research programmes on genetic vulnerability factors in bipolar disorders and is currently conducting a prospective follow-up study on cognitive deficits and relapse risk factors in bipolar disorder. He is the recipient of several research prizes including the University of Paris 12 Research Prize (2000), the Jules Baillarger Prize (2002) and the NARSAD Independent Investigator Award (2004). His ongoing research program on biomarkers of lithium response is funded by the National Research Agency (ANR générique 2014), the Sorbonne Paris Cité University, the French Ministry of Research (PHRC) and the FondaMental/Dassault Fondations Research Prize (2013). He has published over 200 papers and is the author of many books and book chapters.
Inhaltsangabe
Section I: Science of Lithium: The Ion : Lithium.- Pharmacokinetics and pharmacodynamics of lithium.- Lithium : neurotransmission and cellular mechanisms pathways underlying neuroprogression in bipolar disorder.- Lithium on gene expression modulation.- Neuroimaging and lithium.- Conclusion: overview of potential mechanisms of action of lithium in bipolar disorder.- Section II: Practice of Lithium Therapy.- Introduction of lithium in Medicine and Psychiatry.- Lithium Response variability.- Lithium Response variability: Pharmacogenomics studies.- Lithium Response variability: Biomarkers.- Lithium in acute and maintenance treatment of bipolar disorders.- Lithium and suicide prevention.- Lithium in Bipolar disorders international guidelines.- Lithium and pregnancy.- Lithium in children and adolescents.- Short and mid-term side effects of lithium.- Lithium, kidneys, renal failure.- Lithium intoxication.- Discontinuation and re-use of lithium.- Conclusion : overview of indications and monitoring of lithium in bipolar disorders.
Kundenbewertungen
Schreiben Sie eine Kundenbewertung zu diesem Produkt und gewinnen Sie mit etwas Glück einen 15,- EUR bücher.de–Gutschein!
Bewertung schreiben Bewertung schreiben
Mehr zum Thema