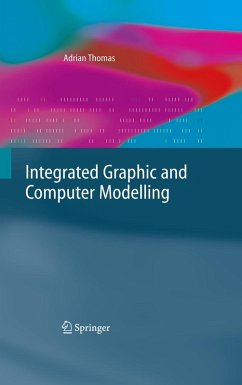 Andere Kunden interessierten sich auch für
Produktbeschreibung
Computer languages and computer graphics have become the primary modes of human-computer interaction. This book provides a basic introduction to "Real and Virtual Environment" computer modelling. Graphics models are used to illustrate both the way computer languages are processed and also used to create computer models of graphic displays. Computer languages have been bootstrapped from machine code, to high-level languages such as Java, to animation scripting languages. Integrating graphic and computer models takes this support for programming, design and simulation work, one step further, allowing interactive computer graphic displays to be used to construct computer models of both real and virtual environment systems. The Java language is used to implement basic algorithms for language translation, and to generate graphic displays. It is also used to simulate the behaviour of a computer system, to explore the way programming and design-simulation environments can be put together.

"The book provides a coherent introduction to the area of computer graphics ... and whose original role in communication, design, entertainment and art has broadened to include a wide spectrum of applications. ... There are two communities of readers for the book. Those who can produce graphics manually, or within a graphics painting or drawing environment ... . And those who can program computers and therefore are accustomed to working in this way ... . The book is full of color illustrations and Java code." (Agineszka Lisowska, Zentrablatt MATH, Vol. 1153, 2009)