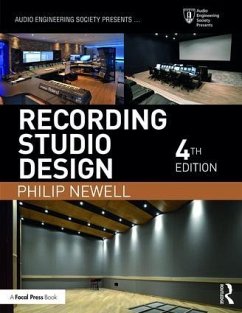 Andere Kunden interessierten sich auch für
Produktbeschreibung
Recording Studio Design, Fourth Edition explains the key principles of successful studio design and construction using straightforward language and the use of practical examples appreciated by readers of previous editions. Updated to reflect new industry standards, this fourth edition addresses improvements in cinema sound, with specific attention paid to B-chain electroacoustic response and calibration. Using over 50 years' experience, author Philip Newell provides detail on the practical aspects of recording in various environments, not only exploring the complex issues relating to the acoustics but also providing real-world solutions. While the book contains detailed discussions about performing rooms, control rooms, and mobile studios, concepts of the infrastructures are also discussed, because no studio can perform optimally unless the technical and human requirements are adequately provided for. In this new edition, sound for cinema provides a platform for highlighting many, wider electroacoustic topics in a way that is relatively easy to visualise. The way in which sound and vision interact is an important aspect of many modern multimedia formats. The new edition includes: A new Chapter 22 that will thoroughly reflect recently published SMPTE investigations which will drastically impact standards for cinema sound; The inclusion of new academic research and its practical applications; An entire new illustrated chapter on room construction principles; and The consolidation of ideas which were only emerging when the earlier editions were published.
Produktdetails
Autorenporträt
Philip Newell is an international consultant on acoustic design and the former technical director of Virgin Records. He is a Fellow of the Institute of Acoustics and a Member of both the Audio Engineering Society and the Society of Motion Picture and Television Engineers. He is also the author of a large number of publications, including eight books for Focal Press, and has been involved in the design of many hundreds of studios for music, cinema and television, as well as live performance venues.
Inhaltsangabe
About the Author

Chapter 14: The Behaviour of Multiple Loudspeakers in Rooms

Chapter 18: Response Disturbances Due to Mixing Consoles and Studio Furniture

Chapter 27: A Pictorial Representation of a Studio Construction