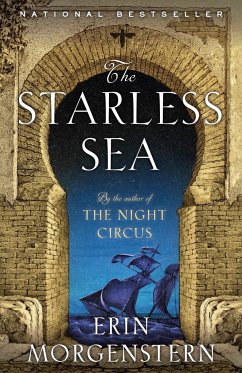 New York Times bestseller Named a best book of the year by The Guardian, Good Housekeeping, Real Simple, and The Milwaukee Journal Sentinel From the New York Times bestselling author of The Night Circus, a timeless love story set in a secret underground world-a place of pirates, painters, lovers, liars, and ships that sail upon a starless sea. Zachary Ezra Rawlins is a graduate student in Vermont when he discovers a mysterious book hidden in the stacks. As he turns the pages, entranced by tales of lovelorn prisoners, key collectors, and nameless acolytes, he reads something strange: a story…mehr

Andere Kunden interessierten sich auch für
Produktbeschreibung
New York Times bestseller Named a best book of the year by The Guardian, Good Housekeeping, Real Simple, and The Milwaukee Journal Sentinel From the New York Times bestselling author of The Night Circus, a timeless love story set in a secret underground world-a place of pirates, painters, lovers, liars, and ships that sail upon a starless sea. Zachary Ezra Rawlins is a graduate student in Vermont when he discovers a mysterious book hidden in the stacks. As he turns the pages, entranced by tales of lovelorn prisoners, key collectors, and nameless acolytes, he reads something strange: a story from his own childhood. Bewildered by this inexplicable book and desperate to make sense of how his own life came to be recorded, Zachary uncovers a series of clues-a bee, a key, and a sword-that lead him to a masquerade party in New York, to a secret club, and through a doorway to an ancient library hidden far below the surface of the earth. What Zachary finds in this curious place is more than just a buried home for books and their guardians-it is a place of lost cities and seas, lovers who pass notes under doors and across time, and of stories whispered by the dead. Zachary learns of those who have sacrificed much to protect this realm, relinquishing their sight and their tongues to preserve this archive, and also of those who are intent on its destruction. Together with Mirabel, a fierce, pink-haired protector of the place, and Dorian, a handsome, barefoot man with shifting alliances, Zachary travels the twisting tunnels, darkened stairwells, crowded ballrooms, and sweetly soaked shores of this magical world, discovering his purpose-in both the mysterious book and in his own life.
Produktdetails
Autorenporträt
ERIN MORGENSTERN is the author of The Night Circus, a number-one national bestseller that has been sold around the world and translated into thirty-seven languages. She has a degree in theater from Smith College and lives in Massachusetts.
Rezensionen
"Anyone who s read Erin Morgenstern s wildly successful fiction debut, The Night Circus, knows how meticulously she crafts her imaginary worlds... the reader [is] immersed in a multitude of stories, the threads of which gradually weave together to a haunting conclusion." NPR

"A spellbinding novel. . . . I could not put it down, and when I finished, I turned immediately back to the first page so I wouldn't have to leave this magical world. If you believe in the power of stories to transcend time and space, to marry love and fate, read this book!" Angie Kim, author of Miracle Creek…mehr
Kundenbewertungen
Schreiben Sie eine Kundenbewertung zu diesem Produkt und gewinnen Sie mit etwas Glück einen 15,- EUR bücher.de–Gutschein!
Bewertung schreiben Bewertung schreiben
Mehr zum Thema