On The Interpretation of Treaties (eBook, PDF) 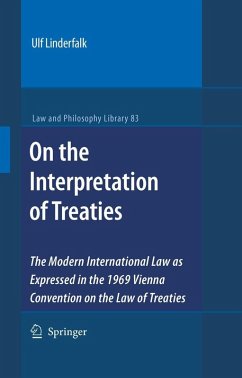 On The Interpretation of Treaties (eBook, PDF)

Traditionally, the substance of Articles 31-33 has been described by reference to the various means of interpretation enumerated in said provisions, and little more than that. As argued in this book, more detail is required. On closer inspection, not only does the Vienna Convention provide information on the interpretation data (or means of interpretation) to be used by appliers when interpreting a treaty provision. It also instructs the appliers how, by using each datum, they shall argue to arrive at a conclusion about the meaning of the interpreted provision; and, to some extent, it…mehr