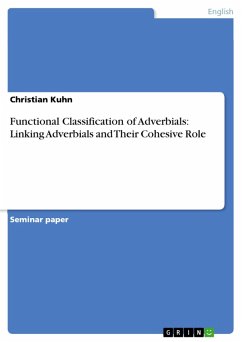 Andere Kunden interessierten sich auch für
Produktbeschreibung
Seminar paper from the year 2004 in the subject English Language and Literature Studies - Linguistics, grade: 2, Otto-von-Guericke-University Magdeburg (Institut für fremdsprachliche Philologien, English Department), course: Hauptseminar: Syntax and Semantics of Adverbials, 5 entries in the bibliography, language: English, abstract: The Swiss linguist Mongin Ferdinand de Saussure (1857-1913) counts for the most important pioneer of modern linguistics. With his epochal work Cours de Linguistique Générale, published posthumously in 1916, he introduced a structural approach to linguistics, which we describe today as functional linguistics. He distinguished between parole and langue (speech and language system) and this way enriched linguistic research with another level to work on. De Saussure is also famous for establishing the view of the arbitrary linguistic sign, whose meaning is not naturally given, but subjectively related to certain conventions of the speaker and the receiver. At any rate, it was his conceptual framework that allows us today to describe language not only in terms of lexical meaning, but also to recognise different information units within texts and sentences whose information value may differ, pragmatically, depending on e.g. the speakers intention; or even grammatically, depending on the element 's arrangement. We can evaluate smallest units of meaning relating to their form and function within the sentence, and we are able to identify rules within language that help us to understand or produce verbal information correctly. It is the goal of this paper to give an insight into a grammatical description of a particular 'part-of-speech category', as I will deal with the syntactic and semantic behaviour of adverbials. I will show in the following how a structural, say functional expertise of language can contribute to sentence and text meaning; for that purpose, the grammatical concept of the linking adverbial shall be a useful example to be discussed and to be focussed upon. In the beginning I will once more sketch the use of syntax for making a statement concerning textual structure, particularly cohesion, to supply the layman with the conceptual background, and to put the topic in its proper place. Then, I will try to develop an understanding for semantic roles and grammatical functions of adverbials while discussing two different approaches to the classification of the English adverbial in the light of modern linguistic theory. The first approach can be found in Greenbaum & Quirk's Stundent's Grammar of the English Language (1990), and the second in Biber et al.'s Student Grammar of Spoken and Written English (2002). [...]