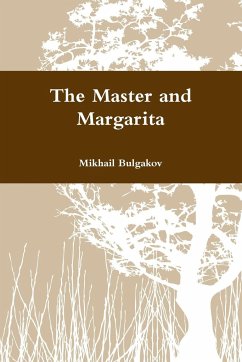 The Master and Margarita is a novel by Mikhail Bulgakov, written between 1928 and 1940, but unpublished in book form until 1967. The story concerns a visit by the devil to the fervently atheistic Soviet Union. Many critics consider it to be one of the best novels of the 20th century, as well as the foremost of Soviet satires.…mehr

Andere Kunden interessierten sich auch für
Produktbeschreibung
The Master and Margarita is a novel by Mikhail Bulgakov, written between 1928 and 1940, but unpublished in book form until 1967. The story concerns a visit by the devil to the fervently atheistic Soviet Union. Many critics consider it to be one of the best novels of the 20th century, as well as the foremost of Soviet satires.
Produktdetails
Autorenporträt
Mikhail Bulgakov (1891 - 1940) was born and educated in Kiev where he graduated as a doctor in 1916, but gave up the practice of medicine in 1920 to devote himself to literature. In 1925 he completed the satirical novella The Heart of a Dog, which remained unpublished in the Soviet Union until 1987. This was one of the many defeats he was to suffer at the hands of his censors. By 1930 Bulgakov had become so frustrated by the political atmosphere and the suppression of his works that he wrote to Stalin begging to be allowed to emigrate if he was not to be given the opportunity to make his living as a writer in the USSR. Stalin telephoned him personally and offered to arrange a job for him at the Moscow Arts Theatre instead. In 1938, a year before contracting a fatal illness, he completed his prose masterpiece, The Master and Margarita. He died in 1940. In 1966-7, thanks to the persistance of his widow, the novel made a first, incomplete, appearance in Moskva, and in 1973 appeared in full.
Rezensionen
"This book is absorbing, brilliant slapstick, and looks deep in to the heart of fantasy and longing" Sunday Times
Rhind-Tutt cleverly indulges the satire and the fantasy in a novel unpublished until 26 years after Bulgakov's death. The absurdity of the Stalinist system is inventively mocked, Christ is sympathetically re-examined and over all is a layer of idiosyncratic fantasy. - Rachel Redford, The Observer First published 26 years after his death in 1940, Bulgakov's extraordinary satire of life under the political, cultural, religious and bureaucratic strictures of Stalinist tyranny has been variously described as Solzhenitsyn crossed with Lewis Carroll and the most powerful Russian novel of the 20th century. His cast of characters, real and imaginary, make Dickens's dramatis personae appear sparse. Bulgakov's include Pontius Pilate, a talking cat who puts on black-rimmed spectacles to read official documents quite often upside down, the devil at whose annual grand ball Stravinsky conducts the band, a poet imprisoned in a psychiatric asylum not unconnected with the Master of the title, and his ever-faithful lover Margarita. Ah, Margarita - what a woman. But maybe I'd be, too, if I had the magic ointment that makes one look 10 years younger. It sounds like a test run for botox. She makes a Faustian pact with the devil for true love's sake so that the Master can write his precious books without fear of arrest. A classic that can be read on many levels, it's played strictly for laughs by Julian Rhind-Tutt. But there is a much darker side. - Sue Arnold, The Guardian
Kundenbewertungen
Schreiben Sie eine Kundenbewertung zu diesem Produkt und gewinnen Sie mit etwas Glück einen 15,- EUR bücher.de–Gutschein!
Bewertung schreiben Bewertung schreiben
Mehr zum Thema
Mehr aus der Kategorie Engl. Books > Historische Romane