Stay with Me (eBook, ePUB) 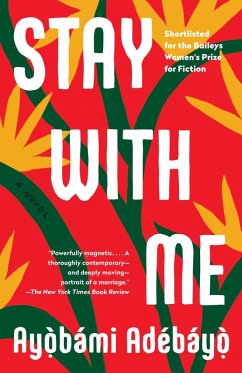 Stay with Me (eBook, ePUB)

Andere Kunden interessierten sich auch für
Produktbeschreibung
A New York Times Notable Book The New York Times' Critics' Top Books of the Year Named a Best Book of the Year by San Francisco Chronicle, National Public Radio, The Economist, Buzzfeed, Paste Magazine, Southern Living, HelloGiggles, and Shelf Awareness Huffington Post's Best Feminist Books of the Year The New York Post's Most Thrilling and Fascinating Books of the Year The New York Public Library's Ten Best Books of the Year "A stunning debut novel." -Michiko Kakutani, The New York Times This celebrated, unforgettable first novel ("A bright, big-hearted demonstration of female spirit." -The Guardian), shortlisted for the prestigious Women's Prize for Fiction and set in Nigeria, gives voice to both husband and wife as they tell the story of their marriage--and the forces that threaten to tear it apart. Yejide and Akin have been married since they met and fell in love at university. Though many expected Akin to take several wives, he and Yejide have always agreed: polygamy is not for them. But four years into their marriage--after consulting fertility doctors and healers, trying strange teas and unlikely cures--Yejide is still not pregnant. She assumes she still has time--until her family arrives on her doorstep with a young woman they introduce as Akin's second wife. Furious, shocked, and livid with jealousy, Yejide knows the only way to save her marriage is to get pregnant. Which, finally, she does--but at a cost far greater than she could have dared to imagine. An electrifying novel of enormous emotional power, Stay With Me asks how much we can sacrifice for the sake of family.

Produktdetails
Autorenporträt
AYOBAMI ADEBAYO's stories have appeared in a number of magazines and anthologies, and one was highly commended in the 2009 Commonwealth short story competition. She holds BA and MA degrees in literature in English from Obafemi Awolowo University, Ife, and has worked as an editor for Saraba Magazine since 2009. She also has an MA in creative writing from the University of East Anglia, where she was awarded an international bursary for creative writing. She has received fellowships and residencies from Ledig House, Sinthian Cultural Centre, Hedgebrook, Ox-Bow School of Art, Ebedi Hills and the Siena Art Institute. She was born in Lagos, Nigeria.
Rezensionen
Scorching, gripping, ultimately lovely Margaret Atwood
Kundenbewertungen
Schreiben Sie eine Kundenbewertung zu diesem Produkt und gewinnen Sie mit etwas Glück einen 15,- EUR bücher.de–Gutschein!
Bewertung schreiben Bewertung schreiben
Mehr zum Thema