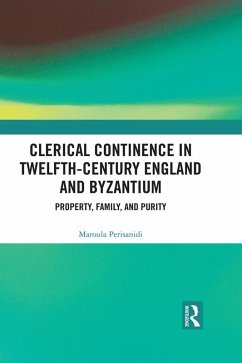 Andere Kunden interessierten sich auch für
Produktbeschreibung
Why did the medieval West condemn clerical marriage as an abomination while the Byzantine Church affirmed its sanctifying nature? This book brings together ecclesiastical, legal, social, and cultural history in order to examine how Byzantine and Western medieval ecclesiastics made sense of their different rules of clerical continence. Western ecclesiastics condemned clerical marriage for three key reasons: married clerics could alienate ecclesiastical property for the sake of their families; they could secure careers in the Church for their sons, restricting ecclesiastical positions and lands to specific families; and they could pollute the sacred by officiating after having had sex with their wives. A comparative study shows that these offending risk factors were absent in twelfth-century Byzantium: clerics below the episcopate did not have enough access to ecclesiastical resources to put the Church at financial risk; clerical dynasties were understood within a wider frame of valued friendship networks; and sex within clerical marriage was never called impure in canon law, as there was little drive to use pollution discourses to separate clergy and laity. These facts are symptomatic of a much wider difference between West and East, impinging on ideas about social order, moral authority, and reform.

Produktdetails
Autorenporträt
Maroula Perisanidi is a Leverhulme Early Career Fellow at the University of Leeds, UK, researching reform and clerical authority in the Eleventh Century. She has published articles on canon law and on the history of sexuality in several major journals.