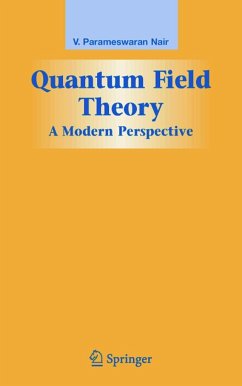 Quantum field theory, which started with Paul Dirac's work shortly after the discovery of quantum mechanics, has produced an impressive and important array of results. Quantum electrodynamics, with its extremely accurate and well-tested predictions, and the standard model of electroweak and chromodynamic (nuclear) forces are examples of successful theories. Field theory has also been applied to a variety of phenomena in condensed matter physics, including superconductivity, superfluidity and the quantum Hall effect. The concept of the renormalization group has given us a new perspective on…mehr

Andere Kunden interessierten sich auch für
Produktbeschreibung
Quantum field theory, which started with Paul Dirac's work shortly after the discovery of quantum mechanics, has produced an impressive and important array of results. Quantum electrodynamics, with its extremely accurate and well-tested predictions, and the standard model of electroweak and chromodynamic (nuclear) forces are examples of successful theories. Field theory has also been applied to a variety of phenomena in condensed matter physics, including superconductivity, superfluidity and the quantum Hall effect. The concept of the renormalization group has given us a new perspective on field theory in general and on critical phenomena in particular. At this stage, a strong case can be made that quantum field theory is the mathematical and intellectual framework for describing and understanding all physical phenomena, except possibly for a quantum theory of gravity.

Quantum Field Theory: A Modern Perspective presents Professor Nair's view of certain topics in field theory loosely knit together as it grew out of courses on field theory and particle physics taught at Columbia University and the City College of CUNY. The first few chapters, up to Chapter 12, contain material that generally goes into any course on quantum field theory, although there are a few nuances of presentation which readers may find to be different from other books. This first part of the book can be used for a general course on field theory, omitting, perhaps, the last three sections in Chapter 3, the last two in Chapter 8 and sections 6 and 7 in Chapter 10. The remaining chapters cover some of the more modern developments over the last three decades, involving topological and geometrical features. The introduction given to the mathematical basis of this part of the discussion is necessarily brief and should be accompanied by books on the relevant mathematical topics as indicated in the bibliography. Professor Nair also concentrates on developments pertinent to a better understanding of the standard model. There is no discussion of supersymmetry, supergravity, developments in field theory inspired by string theory, etc. There is also no detailed discussion of the renormalization group. Each of these topics would require a book in its own right to do justice to the topic. Quantum Field Theory: A Modern Perspective serves as a portal to so many more topics of detailed and ongoing research, referring readers to more detailed treatments for many specific topics. The book also contains extensive references, providing readers a more comprehensive perspective on the literature and the historical development of the subject.

V. Parameswaran Nair is Professor of Physics at City College of The City University of New York (CUNY). Professor Nair has held Visiting Professorships at The Abdus Salam International Center for Theoretical Physics, Rockefeller University, Institute for Advanced Study at Princeton, and Massachusetts Institute of Technology.
Produktdetails
Autorenporträt
V.P. Nair is currently a Professor of Physics at City College of New York. His area of specialization resides in Theoretical High Energy Physics. In addition to holding a position at City College, Mr. Nair has been an Associate Professor at Columbia University and was a member at the Institute for Theoretical Physics at the University of California, Santa Barbara. Other publications include "Nonperturbative Anomalies in Higher Dimensions" and "Quantum Mechanics on the Noncommutative Plane and Sphere".
Inhaltsangabe
Results in Relativistic Quantum Mechanics.- The Construction of Fields.- Canonical Quantization.- Commutators and Propagators.- Interactions and the S-matrix.- The Electromagnetic Field.- Examples of Scattering Processes.- Functional Integral Representations.- Renormalization.- Gauge Theories.- Symmetry.- Spontaneous symmetry breaking.- Anomalies I.- Elements of differential geometry.- Path Integrals.- The Configuration Space in Nonabelian Gauge Theory.- Anomalies II.- Finite temperature and density.- Gauge theory: Nonperturbative questions.- Elements of Geometric Quantization.
Rezensionen
From the reviews: "The monograph is composed on the basis of courses on field theory and particle physics which have been taught by the author ... . Besides exposition of the basic topics in quantum field theory (QFT) it illustrates also various applications of the methods ... . The discussion of each topic given in the present book is accompanied by references ... . The book will be useful for those students and researchers who are familiar with non-relativistic quantum mechanics and wish to have acquaintance with QFT." (Michael B. Mensky, Zentralblatt MATH, Vol. 1077, 2006) "This book is an interesting item in the list of textbooks on quantum field theory. Contrary to many disciplines of theoretical physics there is still no widely accepted canonical set of such textbooks. The present book is a good candidate to enter such a list. Firstly, it has two advantages: it is modern and relatively compact. Also, the clarity and economy of this text are evident ... . The compactness of the book is achieved through the way topics are presented ... ." (Andrzej M. Frydryszak, Mathematical Reviews, Issue 2006 d)
Kundenbewertungen
Schreiben Sie eine Kundenbewertung zu diesem Produkt und gewinnen Sie mit etwas Glück einen 15,- EUR bücher.de–Gutschein!
Bewertung schreiben Bewertung schreiben
Ein Marktplatz-Angebot für "Quantum Field Theory" für 40,00 €
Mehr zum Thema
Mehr aus der Kategorie Buch > Schule & Lernen > Berufliche Fort- und Weiterbildung > Ingenieurswissenschaften > Mechanik