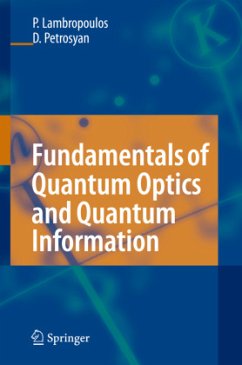 Andere Kunden interessierten sich auch für
Produktbeschreibung
This book is an introduction to the two closely related subjects of quantum optics and quantum information. The book gives a simple, self-contained introduction to both subjects, while illustrating the physical principles of quantum information processing using quantum optical systems. To make the book accessible to those with backgrounds other than physics, the authors also include a brief review of quantum mechanics. Furthermore, some aspects of quantum information, for example those pertaining to recent experiments on cavity QED and quantum dots, are described here for the first time in book form.
Produktdetails
Autorenporträt
Peter Lambropoulos, at present Professor of Physics at the University of Crete, received his PhD in 1965 from the University of Michigan (USA). Since then he has been visiting fellow at JILA, Univ. of Colorado (USA), has served as chair of the physics department at the University of Southern California, Head of the Theory group at the Max Planck Institute for Quantum Optics in Garching as well as director of the Institute of Electronic Structure and Lasers in Crete. The research in his groups over the last 25 years has spanned a broad area of laser physics, such as multiphoton and strong field processes, coherent control, cavity QED, quantum optics in photonic bandgap materials, with recent involvement in the theory of atom lasers and quantum dots. He is author or coauthor of about 250 papers as well as numerous chapters in volumes dealing with the above subfields. P. Lambropoulos is Fellow of the American Physical Society, Chair of the Board EGAS (European Group on Atomic Spectroscopy) of EPS.