in the Organic Chemistry Laboratory 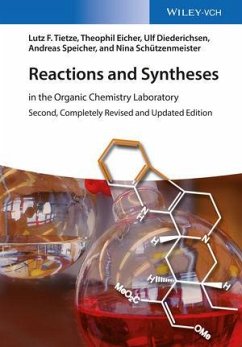 in the Organic Chemistry Laboratory

The second edition of this classic text book has been completely revised, updated, and extended to include chapters on biomimetic amination reactions, Wacker oxidation, and useful domino reactions. The first-class author team with long-standing experience in practical courses on organic chemistry covers a multitude of preparative procedures of reaction types and compound classes indispensable in modern organic synthesis. Throughout, the experiments are accompanied by the theoretical and mechanistic fundamentals, while the clearly structured sub-chapters provide concise background information,…mehr

Andere Kunden interessierten sich auch für
Produktbeschreibung
The second edition of this classic text book has been completely revised, updated, and extended to include chapters on biomimetic amination reactions, Wacker oxidation, and useful domino reactions. The first-class author team with long-standing experience in practical courses on organic chemistry covers a multitude of preparative procedures of reaction types and compound classes indispensable in modern organic synthesis. Throughout, the experiments are accompanied by the theoretical and mechanistic fundamentals, while the clearly structured sub-chapters provide concise background information, retrosynthetic analysis, information on isolation and purification, analytical data as well as current literature citations. Finally, in each case the synthesis is labeled with one of three levels of difficulty. An indispensable manual for students and lecturers in chemistry, organic chemists, as well as lab technicians and chemists in the pharmaceutical and agrochemical industries.
Produktdetails
Autorenporträt
Lutz F. Tietze obtained his Ph.D. in 1968 in Kiel. He then worked as a research associate with Prof. G. Büchi at MIT, Cambridge, USA,as well as with Prof.A.Battersby in Cambridge, UK. Since 1978 he has been Professor and Head of the Institute of Organic and Biomolecular Chemistry at the Georg-August-University in Göttingen. His research focuses on the development of efficient synthetic methods as domino reactions, the total synthesis of natural products, and the design of new selective anticancer agents. Professor Tietze has received many prizes, inter alia the highly prestigious Emil Fischer Medal of the GDCh. He was speaker of a Sonderforschungsbereich, delegate of the DFG Fachkollegium and obtained several guest professorships. He is member of the Göttingen Academy of Sciences and Humanities, Dr. h.c. of the University of Szeged, Chairman of the DZfCh, member of the DHKZ, and has been awarded in 2012 with the position of a Distinguished Research Professor. He has over 460 papers, 34 patents and five books to his name. Theophil Eicher studied chemistry at the University of Heidelberg, Germany, and obtained his Ph.D. under Georg Wittig in 1960. After postdoctoral work at Columbia University, New York, USA, in the laboratories of Ronald Breslow, he habilitated 1967 at the University of Würzburg, Germany, under Siegfried Hünig. In 1974 he was appointed as Associate Professor at the University of Hamburg, Germany, in 1976 as Full Professor of Organic Chemistry at the University of Dortmund, Germany. Since 1982, he worked as Full Professor at Saarland University, Germany, and was retired in 2000. His research interests concerned the synthetic chemistry of cyclopropenones and triafulvenes, as well as natural product synthesis in the field of bryophyte constituents. He is co-author of several books. Jointly with L. F. Tietze, he was awarded the literature prize of the "Fonds der chemischen Industrie". He is Dr. h. c. and Prof. a. h. of the Facultad de Quimica of the Universidad de la Republica, Montevideo/Uruguay. Ulf Diederichsen studied Chemistry in Freiburg, Germany, with a diploma work in organic synthesis and completed his Ph.D. in 1993 under the supervision of Albert Eschenmoser at the ETH Zürich working on homo- and glucose-DNA. After postdoctoral work on radical chemistry at the University of Pittsburgh, USA, in the group of Dennis Curran, he gained his habilitation at the Technical University Munich, Germany. In 1999, he was appointed professor of Organic Chemistry at the University Würzburg, Germany, until joining the Georg-August-University in Göttingen, Germany, in 2001 as full professor of Organic Chemistry. He was visiting professor at the LMU Munich and Goering Visiting Professor at the University of Wisconsin, USA. He got the Karl Winnacker stipend and Hellmut-Bredereck award and is member of Göttingen Academy of Sciences and Humanities. Andreas Speicher studied chemistry at Saarland University, Germany. He obtained his Ph.D. in 1994 under Theophil Eicher and was honored with the Eduard-Martin-Award of his university. He started his independent scientific career and completed habilitation in 2003. He is head of a research group and university lecturer for organic chemistry at the Saarland University and was appointed extraordinary professor in 2011. He is temporarily holding a guest professorship at the University of Strasbourg/France since 2006 and is co-author of several books. His research interests are directed to synthesis and characterization of chemically and biologically relevant natural products, especially to axially chiral macrocyclic compounds. Nina Schützenmeister studied chemistry at the Georg-August-University in Göttingen. After finishing her diploma thesis at the ETH Zürich in the group of Peter H. Seeberger she completed her Ph.D. in 2012 under supervision of Lutz F. Tietze at the Georg-August-University in Göttingen. She then worked as a postdoctoral fellow with Christian Griesinger at the Max-Planck-Institute for Biophysical Chemistry in Göttingen and is currently a Marie-Curie fellow in the group of Varinder K. Aggarwal F.R.S. at the University of Bristol, United Kingdom.
Inhaltsangabe
C
C BOND FORMATION Nucleophilic Addition to Aldehydes, Ketones, Carboxylic Acid Derivatives (Esters, Anhydrides) and alpha,beta
Unsaturated Carbonyl Compounds; Carbonyl Olefination Alkylation of Aldehydes/Ketones, Carboxylic Acids, and beta
Dicarbonyl Compounds Reactions of the Aldol and Mannich Type Electrophilic and Nucleophilic Acylation Reactions of Alkenes via Carbenium Ions Transition
Metal
Catalyzed Reactions Pericyclic Reactions Radical Reactions OXIDATION AND REDUCTION Epoxidation of C=C Bonds Dihydroxylation of C=C Bonds Oxidation of Alcohols to Carbonyl Compounds Enantioselective Reduction of Ketones Biomimetic Reductive Amination Enantioselective Wacker HETEROCYCLIC COMPOUNDS Three
and Four
Membered Heterocycles Five
Membered Heterocycles Six
Membered Heterocycles Condensed Heterocycles Other Heterocyclic Systems; Heterocyclic Dyes SELECTED NATURAL PRODUCTS Isoprenoids Carbohydrates Amino Acids and Peptides Nucleotides and Oligonucleotides DOMINO REACTIONS Domino Reactions in Synthetic Methodology Domino Reactions in The Synthesis of Alkaloids Domino Reactions in The Synthesis of Isoprenoids Domino Reactions for The Synthesis of Chromans And Dioxins Domino Reactions in The Synthesis of Chiroptical Switches INDEX OF REACTIONS INDEX OF PRODUCTS SUBJECT INDEX
Kundenbewertungen
Schreiben Sie eine Kundenbewertung zu diesem Produkt und gewinnen Sie mit etwas Glück einen 15,- EUR bücher.de–Gutschein!
Bewertung schreiben Bewertung schreiben
Mehr zum Thema