The Bias That Divides Us (eBook, ePUB)

The Science and Politics of Myside Thinking 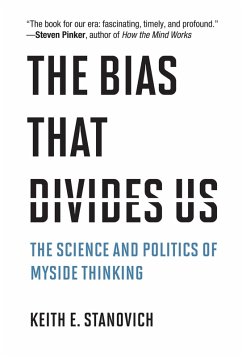 The Bias That Divides Us (eBook, ePUB)

The Science and Politics of Myside Thinking

Andere Kunden interessierten sich auch für
Produktbeschreibung
Why we don't live in a post-truth society but rather a myside society: what science tells us about the bias that poisons our politics. In The Bias That Divides Us, psychologist Keith Stanovich argues provocatively that we don't live in a post-truth society, as has been claimed, but rather a myside society. Our problem is not that we are unable to value and respect truth and facts, but that we are unable to agree on commonly accepted truth and facts. We believe that our side knows the truth. Post-truth? That describes the other side. The inevitable result is political polarization. Stanovich shows what science can tell us about myside bias: how common it is, how to avoid it, and what purposes it serves. Stanovich explains that although myside bias is ubiquitous, it is an outlier among cognitive biases. It is unpredictable. Intelligence does not inoculate against it, and myside bias in one domain is not a good indicator of bias shown in any other domain. Stanovich argues that because of its outlier status, myside bias creates a true blind spot among the cognitive elite--those who are high in intelligence, executive functioning, or other valued psychological dispositions. They may consider themselves unbiased and purely rational in their thinking, but in fact they are just as biased as everyone else. Stanovich investigates how this bias blind spot contributes to our current ideologically polarized politics, connecting it to another recent trend: the decline of trust in university research as a disinterested arbiter.

Produktdetails
Autorenporträt
Keith E. Stanovich is Professor Emeritus of Applied Psychology and Human Development at the University of Toronto. He is the author of What Intelligence Tests Miss, for which he received the 2010 Grawemeyer Award in Education, and coauthor of The Rationality Quotient: Toward a Test of Rational Thinking (MIT Press). In 2012, Stanovich received the E. L. Thorndike Career Achievement Award from the American Psychological Association. He lives in Portland, Oregon.
Inhaltsangabe
Preface
Acknowledgments
1 The Many Faces of Myside Bias
2 Is Myside Processing Irrational?
3 Myside Thinking: The Outlier Bias
4 Where Do Our Convictions Come From? Implications for Understanding Myside Bias
5 The Myside Blindness of Cognitive Elites
6 What Should We Do about Myside Bias?
Notes
References
Subject Index
Name Index
Kundenbewertungen
Schreiben Sie eine Kundenbewertung zu diesem Produkt und gewinnen Sie mit etwas Glück einen 15,- EUR bücher.de–Gutschein!
Bewertung schreiben Bewertung schreiben
Mehr zum Thema