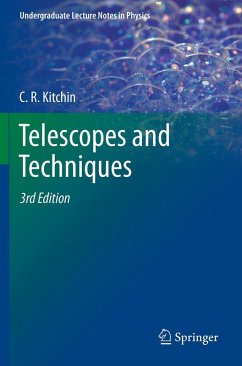 "Telescopes and Techniques" has proved itself in its first edition, having become probably one of the most widely used astronomy texts, both for numerate amateur astronomers and for astronomy and astrophysics undergraduates. The first and second editions of the book were widely used as set texts for introductory practical astronomy courses in many universities. This book guides the reader through the mathematics, physics and practical techniques needed to use telescopes (from small amateur models to the larger instruments installed in many colleges) and to observe objects in the sky.…mehr

Andere Kunden interessierten sich auch für
Produktbeschreibung
"Telescopes and Techniques" has proved itself in its first edition, having become probably one of the most widely used astronomy texts, both for numerate amateur astronomers and for astronomy and astrophysics undergraduates. The first and second editions of the book were widely used as set texts for introductory practical astronomy courses in many universities. This book guides the reader through the mathematics, physics and practical techniques needed to use telescopes (from small amateur models to the larger instruments installed in many colleges) and to observe objects in the sky. Mathematics to around Advanced Placement standard (US) or A level (UK) is assumed, although High School Diploma (US) or GCSE-level (UK) mathematics plus some basic trigonometry will suffice most of the time. Most of the physics and engineering involved is described fully and requires no prior knowledge or experience. This is a 'how to' book that provides the knowledge and background required to understand how and why telescopes work. Equipped with the techniques discussed in this book, the observer will be able to operate with confidence his or her telescope and to optimize its performance for a particular purpose. In principle the observer could calculate his or her own predictions of planetary positions (ephemerides), but more realistically the observer will be able to understand the published data lists properly instead of just treating them as 'recipes.' When the observer has obtained measurements, he/she will be able to analyze them in a scientific manner and to understand the significance and meaning of the results. "Telescopes and Techniques, 3rd Edition" fills a niche at the start of an undergraduate astronomer's university studies, as shown by it having been widely adopted as a set textbook. This third edition is now needed to update its material with the many new observing developments and study areas that have come into prominence since it was published. The book concentrates on the knowledge needed to understand how small(ish) optical telescopes function, their main designs and how to set them up, plus introducing the reader to the many ways in which objects in the sky change their positions and how they may be observed. Both visual and electronic imaging techniques are covered, together with an introduction to how data (measurements) should be processed and analyzed. A simple introduction to radio telescopes is also included. Brief coverage of the most advanced topics of photometry and spectroscopy are included, but mainly to enable the reader to see some of the developments possible from the basic observing techniques covered in the main parts of the book.

Produktdetails
Autorenporträt
Chris Kitchin is Emeritus Professor of Astronomy at the University of Hertfordshire and has a lifelong interest in astronomical instrumentation, using telescopes of all sizes, studying the rapidly growing number of planets known to orbit other stars, and trying to communicate his own excitement at the recent explosion of discoveries about the universe. When not a hundred light years from Earth (at least in his imagination), Chris enjoys being taken for long country walks by his two border collies.

He is author of a vast number of scientific papers and sixteen books by various publishers, including Springer's Illustrated Dictionary of Practical Astronomy, Solar Observing Techniques, Seeing Stars, A Photo Guide to the Constellations, Exoplanets, Galaxies in Turmoil, and of course the first two editions of Telescopes and Techniques, which sold in excess of 12,000 copies.

Inhaltsangabe
Preface to the First Edition.- Preface to the Second Edition.- Preface to the Third Edition.- Part I: Telescopes.- Chapter 1: Types of Telescopes.- Chapter 2: Telescope Optics.- Chapter 3: Modern Small Telescope Design.- Part II: Positions and Motions.- Chapter 4: Positions in the Sky.- Chapter 5: Movements of Objects in the Sky.- Chapter 6: Telescope Mountings.- Part III: Observing.- Chapter 7: Electromagnetic Radiation.- Chapter 8: Visual Observing.- Chapter 9: Detectors and Imaging.- Chapter 10: Data Processing.- Chapter 11: Photometry.- Chapter 12: Spectroscopy.- Appendix A: For Further Reading.- Appendix B: Constellations.- Appendix C: Answers to Exercises.- Appendix D: SI and Other Units.- Appendix E: The Greek Alphabet.- Index.
Rezensionen
From the reviews of the third edition: "Telescopes And Techniques is a book that would be helpful for every new telescope owner, and of interest to also more seasoned amateur astronomers, but it will be a real gem for students just starting to learn about observational astronomy. ... Kitchin's 'Telescopes And Techniques' bridges the gap between being a textbook of practical astronomy and a handbook of telescope maintenance and use. ... a very informative and well structured book that will definitely be consulted even after having been read the first time." (Kadri Tinn, AstroMadness.com, January, 2014)
Kundenbewertungen
Schreiben Sie eine Kundenbewertung zu diesem Produkt und gewinnen Sie mit etwas Glück einen 15,- EUR bücher.de–Gutschein!
Bewertung schreiben Bewertung schreiben
Mehr zum Thema