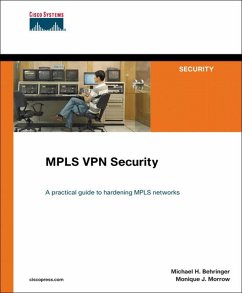 MPLS VPN Security is the first book to address the security features of MPLS VPN networks and to show you how to harden and securely operate an MPLS network. Divided into four parts, the book begins with an overview of security and VPN technology. A chapter on threats and attack points provides a foundation for the discussion in later chapters. Part II addresses overall security from various perspectives, including architectural, design, and operation components. Part III provides practical guidelines for implementing MPLS VPN security. Part IV presents real-world case studies that encompass details from all the previous chapters to provide examples of overall secure solutions.

Drawing upon the authors' considerable experience in attack mitigation and infrastructure security, MPLS VPN Security is your practical guide to understanding how to effectively secure communications in an MPLS environment.

"The authors of this book, Michael Behringer and Monique Morrow, have a deep and rich understanding of security issues, such as denial-of-service attack prevention and infrastructure protection from network vulnerabilities. They offer a very practical perspective on the deployment scenarios, thereby demystifying a complex topic. I hope you enjoy their insights into the design of self-defending networks."

Produktdetails
Autorenporträt
Michael H. Behringer is a distinguished engineer at Cisco®, where his expertise focuses on MPLS VPN security, service provider security, and denial-of-service (DoS) attack prevention. Prior to joining Cisco Systems, he was responsible for the design and implementation of pan-European networks for a major European Internet service provider.

Monique J. Morrow is a CTO consulting engineer at Cisco Systems, to which she brings more than 20 years' experience in IP internetworking, design, and service development for service providers. Monique led the engineering project team for one of the first European MPLS VPN deployments for a European Internet service provider.