The Stigma of Mental Illness - End of the Story? (eBook, PDF) 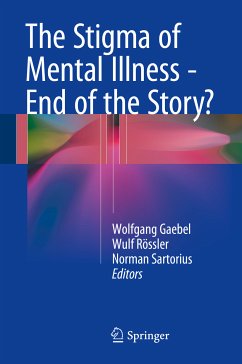 The Stigma of Mental Illness - End of the Story? (eBook, PDF)

This book makes a highly innovative contribution to overcoming the stigma and discrimination associated with mental illness - still the heaviest burden both for those afflicted and those caring for them. The scene is set by the presentation of different fundamental perspectives on the problem of stigma and discrimination by researchers, consumers, families, and human rights experts. Current knowledge and practice used in reducing stigma are then described, with information on the programmes adopted across the world and their utility, feasibility, and effectiveness. The core of the volume…mehr

Andere Kunden interessierten sich auch für
Produktbeschreibung
This book makes a highly innovative contribution to overcoming the stigma and discrimination associated with mental illness - still the heaviest burden both for those afflicted and those caring for them. The scene is set by the presentation of different fundamental perspectives on the problem of stigma and discrimination by researchers, consumers, families, and human rights experts. Current knowledge and practice used in reducing stigma are then described, with information on the programmes adopted across the world and their utility, feasibility, and effectiveness. The core of the volume comprises descriptions of new approaches and innovative programmes specifically designed to overcome stigma and discrimination. In the closing part of the book, the editors - all respected experts in the field - summarize some of the most important evidence- and experience-based recommendations for future action to successfully rewrite the long and burdensome 'story' of mental illness stigma and discrimination.

Produktdetails
Autorenporträt
Wolfgang Gaebel is Professor of Psychiatry, Director of the Department of Psychiatry and Psychotherapy at the Heinrich-Heine University, Duesseldorf, and Head of the LVR-Klinikum Düsseldorf. Since 2014 he is additionally Director of the LVR-Institute for Mental Healthcare Research (LVR-IVF) and the WHO Collaborating Center on Quality Management and Empowerment in Mental Health. During his career, Professor Gaebel has held positions as President of the German Society of Psychiatry, Psychotherapy and Nervous Diseases (DGPPN). Furthermore, he was President of the German Society of Biological Psychiatry (DGBP). He is currently chairman of the WPA Section on Schizophrenia as well as chairman of the WPA Section on Quality Assurance. Since 2009 he is Board Member of the European Psychiatric Association (EPA), co-chair of the Section on Schizophrenia and he coordinates the EPA Guidance Project. Since 2015 he is President of the EPA. He is also chairman of the German Alliance on Mental Health. His research focus includes clinical, pharmacological, and neurophysiological aspects of schizophrenia, experimental psychopathology and classification, treatment guidelines and quality management, and research on stigma and discrimination. His current interest is also on the revision of classification towards ICD-11 and DSM-5. Professor Gaebel has published more than 700 scientific articles, he is editor/author of about 50 books/supplements on a range of scientific topics, he is member of the editorial boards of various national/international journals, and editor in chief of the bilingual journal 'Die Psychiatrie'. Wulf Rössler studied Medicine (1969-1975) and Psychology (1976-1981) at the University of Heidelberg and ended his studies with a medical degree (MD) and a psychological degree (MSc). He started his career in 1981 at the Central Institute of Mental Health in Mannheim (Germany), where he was appointed as Director of the State Model Program in Psychiatry (Baden-Württemberg/Germany) 1983-1987. In 1995/96 he was the Deputy Medical Director of the Psychiatric Department at the Central Institute of Mental Health in Mannheim (Germany) and the head of the "Mental Health Services Research" Unit at the Institute. He has been a full Professor of Clinical and Social Psychiatry at the University of Zurich and Clinical Director at the Psychiatric University Hospital Zurich between 1996 and 2013. He was the Chairman of the Medical Board of the Psychiatric University Hospital from 1999 to 2003 and 2009 to 2012. Between 2009 and 2015 he was the Director of the Zurich Program for Sustainable Development of Psychiatric Services, a comprehensive research program with nine large-scaled projects. Since 2009 he is a fellow of the Collegium Helveticum, a joint research institute between the University of Zurich and the Swiss Federal Institute of Technology Zurich (ETH), where he takes responsibility for several research projects. Since 2013 he is a Senior Professor at the Leuphana University Lüneburg and a Professor of Post-Graduation at the University of Sao Paulo. He is the author of about 550 publications and the editor of various textbooks concerning Emergency Psychiatry, Psychiatric Rehabilitation, Social Psychiatry, and prevention of mental disorders or art therapy. Norman Sartorius, MD, MA, DPM, PhD, FRCPsych, was the first Director of the Division of Mental Health of WHO, a position which he held until mid-1993. In June 1993 Professor Sartorius was elected President of the World Psychiatric Association (WPA) and served as its President until August 1999. Subsequently he became President of the Association of European Psychiatrists (EAP) a position held until December 2001. He is the President of the Association for the Improvement of Mental Health Programmes and a member of the Geneva Prize Foundation having been its President 2004-2008. Dr Sartorius holds professorial appointments at the Universities of London, Prague and Zagreb and at several other universities in the USA and China. Professor Sartorius has published more than 400 articles in scientific journals, authored or co-authored a number of books and edited many others. He is an Honorary Fellow of numerous professional associations and has received honorary doctorates from universities in the Czech Republic, Denmark, Sweden and the UK. He is an honorary fellow of the Royal College of Psychiatrists of the United Kingdom of Great Britain, the of the Royal Australian and New Zealand College of Psychiatrists and Distinguished Fellow of the American Psychiatric Association - he is an honorary member of many other professional organizations. He is an Honorary member of the Medical Academies in Mexico, Peru, Croatia and a corresponding member of the Croatian Academy of Arts and Sciences and of the Spanish Royal Medical Academy.
Inhaltsangabe
Part I: Introduction.- Part II: Stigma and discrimination - different perspectives.- History.- A psychiatry-specific phenomenon.- Types of stigma and mechanisms.- Stigma in different cultures.- Disorder-specific differences.- Who is affected?.- Who is contributing?.- Impact on provision and use of services for mental and physical disorders.- Influence on illness course.- Changes of stigma over time (with emphasis on the past 30 years).- The viewpoint of consumers.- The viewpoint of families.- A human rights perspective.- Part III: "Fighting" stigma and discrimination - current practice and knowledge: Country perspectives: Europe.- Canada.- New Zealand.- Commentaries: What has proven effective.- What is not effective.- Part IV: Overcoming stigma and discrimination - new approaches: Fields of intervention.- Techniques.- Bottom up vs top down.- Illness models.- Treatment, prevention, rehabilitation.- Recovery.- Renaming.- Trialogue.- Empowerment, Inclusion.- Legal changes.- Part V: Contribution of international agencies: European Psychiatric Association.- Council of Europe.- WHO in Europe (European Mental Health Action Plan).- WHO worldwide (Global Mental Health Action Plan).- World Psychiatric Association.- Part VI: Conclusion and Recommendations.
Rezensionen
"It will be an excellent resource for those wanting to know more about how stigma became a focus of research. ... In summary, this large volume ... will serve as a resource for students, researchers, and community activists. It provides a wealth of multicultural perspectives that is truly refreshing in its scope and hopeful messages." (Andrew Nocita, PsycCRITIQUES, Vol. 62 (13), March, 2017)