The Story of the Largest Covert Operation in History: The Arming of the Mujahideen by the CIA 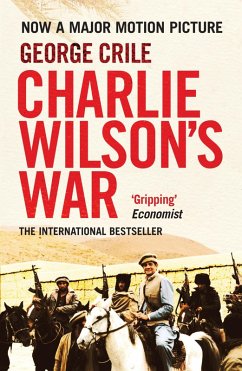 The Story of the Largest Covert Operation in History: The Arming of the Mujahideen by the CIA

Two recent events have transformed the world: the collapse of the Soviet Union and the rise of militant Islam. This is the first book to explain the link between these two occurrences. George Crile spent nearly a decade researching and writing this original account of the biggest, most expensive secret war in history: the arming of the Afghan resistance to Soviet occupation. Moving from the secret chambers in CIA headquarters to stand-offs in the Khyber Pass, Charlie Wilson's War is one of the most thorough and vivid descriptions of CIA operations ever written. It is the missing chapter in the geopolitics of our time.…mehr

Andere Kunden interessierten sich auch für
Produktbeschreibung
Two recent events have transformed the world: the collapse of the Soviet Union and the rise of militant Islam. This is the first book to explain the link between these two occurrences. George Crile spent nearly a decade researching and writing this original account of the biggest, most expensive secret war in history: the arming of the Afghan resistance to Soviet occupation. Moving from the secret chambers in CIA headquarters to stand-offs in the Khyber Pass, Charlie Wilson's War is one of the most thorough and vivid descriptions of CIA operations ever written. It is the missing chapter in the geopolitics of our time.

Produktdetails
Autorenporträt
George Crile is a veteran producer for 60 Minutes and 60 Minutes II and lives in New York City with his wife and four daughters.
Rezensionen
A vivid narrative. . . . Charlie Wilson's War is a behind-the-scenes chronicle of a program that is still largely classified. . . . In its time there was little dispute that the covert war was one of the most successful C.I.A. operations ever undertaken. . . . Few people who remember Wilson's years in Washington would discount even the wildest tales." David Johnston, The New York Times Book Review

Irresistible. . . . [A] thoroughly reported, painstakingly detailed and calmly written account. . . . The story of this odd and world-shaping partnership really can't be believed until Crile and his thorough reporting gradually make it clear that yes, it all really happened. Crile also sketches a variety of other figures in this drama with an eye for what makes them strange and interesting." Steve Kettman, The San Francisco Chronicle

Charlie Wilson's War is one of the most important books ever written about U.S. government covert operations. . . . [It's] such a sprawling tale that describing it adequately in a brief review is daunting." Steve Weinberg, The Seattle Times

[A] glowing account. . . . Crile is . . . an exhuberant Tom Clancy-type enthusiast for the Afghan caper. . . . Criles account is important, if appalling, precisely because it details how a ruthless ignoramus congressman and a high-ranking CIA thug managed to hijack American foreign policy." Chalmers Johnson, The Los Angeles Times Book Review

Charlie Wilson's War reads like a best-selling novel. . . . Crile's globe-trotting research and adroit writing have produced a vastly entertaining book that outmuscles most spy novels in its quota of sheer thrills and chills." John Marshall, The Seattle Post-Intelligencer

Crile's real accomplishment is in telling the human story of Rep. Charlie Wilson of Texas and a now-retired covert CIA operative named Gust Avrakotos. . . . [Crile] has unearthed some startling details about this chapter of our covert history, found and written about two colorful if flawed characters, and lent a great deal to a better understanding of our recent past and our troubled present." Edward P. Smith, The Denver Post

A cross between Tom Clancy and Carl Hiassen, with the distinguishing feature that it's all apparently true. . . . Throw in a middle-aged Texan belly dancer, an assortment of Congressional looinies, a few beauty queens, some ruthless Afghan rebels, and a murderous Pakistani dictator who only wants to be understood." Gerard DeGroot, Christian Science Monitor

Charlie Wilson's War conveys the sense of victory CIA leaders felt over the success' in Afghanistan. . . . Wilson himself is a writer's dream of a main character. . . . A rollicking good tale." Karen Sandstrom, The Cleveland Plain Dealer

In the midst of Crile's important expose of U.S. covert policy in Afghanistan and it's ramifications, there's an engrossing character study as well." Clay Smith, The Austin Chronicle

His narrative is fast-moving, supercharged, and overheated, chock-full of high drama and sexual innuendo. In short, it is great fun." Raymond Puffer, KLIATT

The subtitle hereThe Extraordinary Story of How the Wildest Man in Congress and a Rogue CIA Agent Changed the History of Our Timessays it all. Almost. . . . Much of the tale of getting there is only now revealed by Crile, a veteran TV producer and hell of a story man." Celia McGee, New York Daily News

A helluva story. . . . [Crile] eschews highfalutin generalizations in favor of racy vignettes. This yields a riveting glimpse of the inner workings of a secret area of government." James Critchlow, The New Leader

A gripping read for students of the cold war, anyone who wants the lowdown on how their tax dollars really get spent, Central Asia junkies or those who delight in cloaks, daggers and plausible deniability." The Economist

[Crile] gives intriguing insight into the methods and mentality of the cloak-and-dagger business, as well as to the machinations of that handful of relatively unknown members of Congress who dominate Capitol Hill by controlling appropriations." Gerard A. Patterson, Pittsburg Post-Gazette

This I-can't-believe-it's-not-fiction tale has it all: a Marlboro Man handsome leading man, a parade of impossibly gorgeous women, sex, spies, copious quantities of booze and enough violence to take Arnold Schwarzenegger and his Terminator scriptwriters through several more sequels.  The story, narrated with cinematic verve by George Crile . . . is both hilarious and harrowing." Kathy Kiely, Arkansas Democrat

Charlie Wilson's War is one of those rare, priceless books about politics and history. It has the uncanny ability to uplift even the most hardened of spirits while simultaneously confirming anyone's deepest fears about the way it all really works. . . . A masterful narrator, Crile manages to include the relevant technical data. . . .[He] offers a trenchant meditation on just how fleeting glory really is, and just how quickly the wheel of fortune can turn the other way. . . . It has more political intrigues, more suspense, more intense psychological analysis, and more technological know-how than anything Tom Clancy or Robert Ludlum could fantasize about. And it has something else besides: it's true." Michael Shannon Friedman, Charlotte Gazette

Fascinating [and] entertaining. . . . What a story!" Dennis Lythgoe, The Deseret News

If you like tell-all books about the unbelieveable things that our elected folks can do for you, you will love this book. Charlie Wilson's War has it all as well as an explanation about how our most feared enemy, Osama bin Laden, got his start with a little unintended help from his friends right here in the United States." Saralee Terry Woods, The Nashville City Paper

A bizarre chapter of contemporary history that could have been written by Ian Fleming (it is too improbable for Tom Clancy or John LeCarre), Charlie Wilson's War is a true tall tale of silver screen-sized characters that, for better or worse, changed the world." Mary Brown Malouf, The Salt Lake Tribune

Charlie Wilson's War shines the light on a gripping story of international intrigue, booze, drugs, sex, high society and arms deals. The last great battle of the Cold War was anything but a typical CIA program." Lucas Everidge, Politics Now

One thing I especially like about Crile's treatment of all this splendid material is his almost tender portrait of Wilson himself, warts and all. . . . It's a whale of a tale, and I recommend it highly. You'll never find another history that reads more like a cross between Flashman and a Tom Clancy novel." Molly Ivins, Working For Change

Put the Tom Clancy clones back on the shelf; this covert-ops chronicle is practically impossible to put down. No thriller writer would dare invent Wilson. . . . Superb writing from Crile . . . will keep even the most vigorous critics of this Contra-like affair reading to the end." Publishers Weekly (starred review)

Crile offers an absorbing, thoroughly detailed look at the largest and most successful CIA operation in U.S. History. . . . [Charlie Wilson's War is an] engrossing account of the remarkable battle that ended the Soviet Union's hold on Afghanistan. Readers interested in the politics and cultures of Washington, D.C., and the Middle East will relish this book." Booklist (Starred Review)

An engaging, well-written, newsworthy study of practical politics and its sometimes unlikely players, and one with plenty of implications." Kirkus Reviews

Crucial and timely. . . . Criles book, with its investigative verve and gripping narrative, is a comprehensive political assessment and sobering account of the power structures that run parallel to, but apparently unknown by, official government authorities." PW Daily for Booksellers

Americans often ask: Where have all the heroes gone?' Well a lot of them come roaring through in this tour de force of reporting and writing. Tom Clancy's fiction pales in comparison with the amazing, mesmerizing story told by George Crile. By resurrecting a missing chapter out of our recent past, Charlie Wilson's War provides us with the key to understanding the present." Dan Rather

An amazing tale, made all the more amazing because it was missed by the press. George Crile has written a book revealing the extraordinary details and intrigue of a secret war, and that alone would be a monumental achievement. But he has also written a book about how power works in Washington, about how the C.I.A. succeeded in this war but failed because it armed an ally who became our enemy, about how we might better understand Islamic fundamentalism, about how a solitary Congressman guilefully moved the U.S. government, and all of this comes with a breathtaking cast of characters worthy of a LeCarre novel. Only it's all true. And just as vivid." Ken Auletta

[A] riveting, beautifully researched and profoundly disturbing book. . . . Crile's book is also an astonishing glimpse into the world of the CIA and the power of individual, cash-rich lobbies in American politics. More than anything, it is the parade of characters that is the real pleasure of the book." Jason Burke, Guardian (UK)