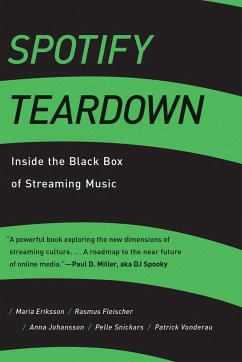 An innovative investigation of the inner workings of Spotify that traces the transformation of audio files into streamed experience.
Spotify provides a streaming service that has been welcomed as disrupting the world of music. Yet such disruption always comes at a price. Spotify Teardown contests the tired claim that digital culture thrives on disruption. Borrowing the notion of teardown from reverse-engineering processes, in this book a team of five researchers have playfully disassembled Spotify's product and the way it is commonly understood.
Spotify has been hailed as the solution to…mehr

Andere Kunden interessierten sich auch für
Produktbeschreibung
An innovative investigation of the inner workings of Spotify that traces the transformation of audio files into streamed experience.

Spotify provides a streaming service that has been welcomed as disrupting the world of music. Yet such disruption always comes at a price. Spotify Teardown contests the tired claim that digital culture thrives on disruption. Borrowing the notion of teardown from reverse-engineering processes, in this book a team of five researchers have playfully disassembled Spotify's product and the way it is commonly understood.

Spotify has been hailed as the solution to illicit downloading, but it began as a partly illicit enterprise that grew out of the Swedish file-sharing community. Spotify was originally praised as an innovative digital platform but increasingly resembles a media company in need of regulation, raising questions about the ways in which such cultural content as songs, books, and films are now typically made available online.

Spotify Teardown combines interviews, participant observations, and other analyses of Spotify's front end with experimental, covert investigations of its back end. The authors engaged in a series of interventions, which include establishing a record label for research purposes, intercepting network traffic with packet sniffers, and web-scraping corporate materials. The authors' innovative digital methods earned them a stern letter from Spotify accusing them of violating its terms of use; the company later threatened their research funding. Thus, the book itself became an intervention into the ethics and legal frameworks of corporate behavior.

Produktdetails
Autorenporträt
Maria Eriksson is a social anthropologist and a PhD candidate in the Department of Culture and Media Studies at Umeå University. Rasmus Fleischer is a postdoctoral Researcher in the Department of Economic History at Stockholm University. Anna Johansson is an Associate Senior Lecturer in Ethnology at HUMlab at Umeå University. Pelle Snickars is Professor of Media and Communication Studies at Umeå University. Patrick Vonderau is Professor of Media Studies at Stockholm University.
Rezensionen
Full of canny insights about media disruption and algorithm culture as well as odd tidbits that will delight music history fans...the book is as much a chronicle of Spotify the company as it is an open-ended question about the future of music. Rolling Stone
This incredible investigation will open your eyes to an entire universe of data sharing and online marketing occurring at octaves too low for human consciousness to detect. Big Think
A work that is, by turns, both surprising and banal, provocative and benign, empowering and frustrating. THE QUIETUS
Dispels the misunderstanding that Spotify is - or at least primarily - about music. Süddeutsche Zeitung
I loved the book and I highly recommend it.... Spotify is portrayed not as a company that was interested in saving the music industry but as one that was created by a couple of bored advertising bros.... Spotify Teardown shows a company much like all advertising-support music platforms, where the ultimate customer is Coca-Cola; not music fans nor artists. Penny Fractions
Spotify Teardown: Inside the Black Box of Streaming Music is an ambitious, wide-ranging, and mis-titled book. Studying firms like Spotify is notoriously challenging....The result is a methodological commitment to exteriority, which pays off in the form of delightfully inventive methods that reimagine the nature of the thing we call Spotify. Thus, if I suggest that this book should be subtitled Outside the Black Box, it is no insult: its greatest contribution may be demonstrating how important the outside is both to Spotify's functioning and to what we understand it to be. Information & Culture: A Journal of History
Highly readable.... The rigor and curiosity with which they treat their subject are necessary: Spotify has completely transformed the music industry, and to truly understand how and why requires illuminating each nebulous part of the company. The Nation
The book is not so much a nuts-and-bolts analysis of how Spotify works so much as a critical account of why it works the way it does today.
Spotify Teardown is a book very much of this moment. As well as considering the streaming platform's 'front end' through consulting news coverage, company blogs, financial results, interface analysis and more, it also uses numerous experimental methodologies n an attempt to get at Spotify's mysterious 'back end', and its particular algorithm enabled wrangling of the digital music commodity. Convergence
Spotify Teardown is a rhyme and reason for all platforms mediating our musical consumption. There's a hint of quasi-fascist gatekeeping: you wouldn't need to type in 'Latin' in South America, because that's all you'll be offered, and their policy of cis good life imagery, of 'chrono normative' lifestyles of getting out of bed, going to work, to the gym normalises how we chill into categories we can imitate. DJ Mag…mehr
Kundenbewertungen
Schreiben Sie eine Kundenbewertung zu diesem Produkt und gewinnen Sie mit etwas Glück einen 15,- EUR bücher.de–Gutschein!
Bewertung schreiben Bewertung schreiben
Mehr zum Thema