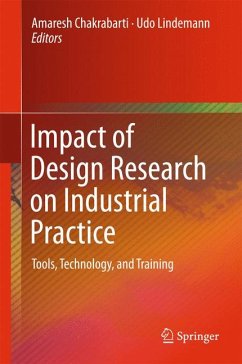 Showcasing exemplars of how various aspects of design research were successfully transitioned into and influenced, design practice, this book features chapters written by eminent international researchers and practitioners from industry on the Impact of Design Research on Industrial Practice.
Chapters written by internationally acclaimed researchers of design analyse the findings (guidelines, methods and tools), technologies/products and educational approaches that have been transferred as tools, technologies and people to transform industrial practice of engineering design, whilst the…mehr

Andere Kunden interessierten sich auch für
Produktbeschreibung
Showcasing exemplars of how various aspects of design research were successfully transitioned into and influenced, design practice, this book features chapters written by eminent international researchers and practitioners from industry on the Impact of Design Research on Industrial Practice.

Produktdetails
Autorenporträt
Prof. Dr. Amaresh Chakrabarti is Professor of Engineering Design at Centre for Product Design and Manufacturing at Indian Institute of Science, Bangalore. He has a BE in Mechanical Engineering from University of Calcutta, India, ME in Mechanical Systems Design from Indian Institute of Science and a PhD from University of Cambridge, UK in Engineering Design. After PhD, Professor Chakrabarti led for ten years the Design Synthesis team at the EPSRC Centre for Excellence Engineering Design Centre at the University of Cambridge, before joining Indian Institute of Science. Professor Chakrabarti worked extensively in the areas of design synthesis and creativity, eco-design and sustainability and knowledge engineering and management and authored/edited 9 books (5 published by Springer), over 250 peer-reviewed articles, and has 9 patents and 2 software copyrights granted/pending. Outcomes of research from his group has led to various models, methods and tools that have been absorbed in Design Practice by organisations as diverse as Boeing, Pratt & Whitney, ISRO and IMI, and Rolls Royce. With Professor Lucienne Blessing, Professor Chakrabarti co-authored DRM, a design research methodology used widely around the world as a framework for carrying out engineering design research. Professor Chakrabarti is an Associate Editor of AI EDAM Journal (Cambridge University Press), Area Editor for Research in Engineering Design (Springer), Regional Editor for Journal for Remanufacturing (Springer), Advisory Editor for Journal of Engineering Design (Taylor & Francis), Clean Technologies and Environmental Policy (Springer) and five other international journals. Prof. Chakrabarti is on the Advisory Board of The Design Society, UK. Professor Chakrabarti founded IDeASLab - the first laboratory in India for research into design creativity, sustainability and innovation. Prof. Chakrabarti is an Honorary Fellow of the Institution of Engineering Designers, the only peer society under the Royal Charter in the UK representing engineering design as a profession. Prof. Dr.-Ing. Udo Lindemann is Professor at the Chair of Product Development, Department of Mechanical Engineering, Technical University Munich (TUM), Germany. He did his Dipl.-Ing. in Mechanical Engineering in Hannover (1974), and Dr.-Ing. in Mechanical Engineering from TUM in 1979. During 1974-1980, he was a research Assistant jointly at University Hannover and TUM. During 1980-1992, he was worked (first as Assistant, later as Director) in RENK AG, Augsburg, Germany. During 1992-1995, he worked as CEO at the MAN Miller Printing Machines GmbH, Geisenheim, Germany. Since 1995, he has been a Full Professor at the Chair of Product Development, Dept. of Mechanical Engineering, TUM. He has supervised over 60 PhDs and currently supervising another 35 PhD-students. During 1998 2007, he took up positions of the Dean for Study Matters, Assistant Dean and Dean of Mechanical Engineering. Between 1999 2007, he was a Member of the Supervisory Board of FH Munich (University of Applied Sciences). In 2006, he co-founded TESEON GmbH, Garching, Germany. Since 2007, he has been a Member of the Academic Senate of TUM (re-elected until 2013, acting as chairman since 2010). Since 2007, he has also been an internal member of the TUM Supervisory Board (since 2010 its vice-chairman). Professor Lindemann is a Co-Editor of the Journal Konstruktion (VDI-Springer Germany) and is on the Editorial Board of several international journals including Design Studies, Design Research and Research in Engineering Design. He authored / co-authored over ten books, edited over ten books and authored / co-authored more than 500 publications. He is an elected member of Acatech, member of the International Advisory Board of Politecnico di Torino, member of WiGeP (German scientific organization in product development/engineering design), member of the Design Society (and was its president during 2007-2010), member of the Scientific Board of international conferences, on the Steering Committee of EDC (Engineering Design Centre) University Cambridge, UK and a member of the council of charities Schäffler-FAG and Zeidler-Forschungsstiftung. His research interests include: design theory, methods, product design: innovative and creative design; design representations; creative problem solving; product design methodologies; integrated product development; industrial design; entrepreneurship; design to cost; knowledge management; co-operation and collaboration in distributed teams; lean development; structural complexity; change management; and strategic planning.
Inhaltsangabe
This author is an important author and is very keen to get his book published. Unfortunately he has not supplied a ToC, but I will contact him for more information. He has however provided a 'List of Invited Chapter Authors' (see below).