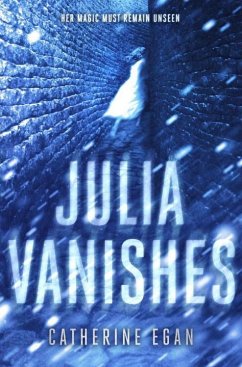 Jetzt bewertenJetzt bewerten
Andere Kunden interessierten sich auch für
Produktdetails
Rezensionen
"The first book in the Witch's Child trilogy has adventure, murder, romance, intrigue, and betrayal with a 16-year-old heroine that is both fierce and flawed at the same time. Catherine Egan is an exciting new talent." -Hypable.com

"Readers will find themselves immediately immersed in the narrative and invested in the fate of Julia, who is both feisty and flawed. There is a richness to this inaugural volume of the Witch's Child trilogy, and readers will be hard pressed to put it down." -Booklist starred review

"Julia's a wonderful, fully realized heroine with moral dilemmas aplenty. For those readers waiting for the sequel to Marie Lu's The Rose Society, a well-realized page-turner in the same vein." -Kirkus Reviews

"A fast-paced, deftly written fantasy with a complex and memorable protagonist. I can't wait for the nextinstallment!" -Juliet Marillier, author of Wildwood Dancing

"Julia's complexities fascinate. In the suspenseful, action-packed debut of the Witch's Child trilogy, Catherine Egan spins out a dark and deep world of magic and crime." -Shelf Awareness

"This is a great choice for true fantasy lovers. The worldbuilding is exceptionally done. A truly outstanding first book in what is sure to be a sought-after series."--VOYA

"Right from the start, it's nearly impossible to put this book down. Equally difficult is pinning down its genre, as it has elements of fantasy, mystery, romance, action, and adventure-there's even a search for a serial killer. Egan's world-building is as richly realized as her characters. Julia's home of Spira City, a world of ritual cleansings, witch drownings, and religious power struggles, resembles medieval Europe; Julia is feisty, fierce and believably flawed, and her many dilemmas and difficult moral choices add real depth to an already-suspenseful plot. Happily, this is the first of a series, called The Witch's Child, and there are more adventures to come." -- Lynn Rutan, The Booklist Reader