Flight to the Land of Oz 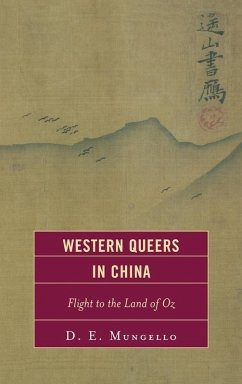 Flight to the Land of Oz

Andere Kunden interessierten sich auch für
Produktbeschreibung
This unique work examines the role played by sexuality in the historical encounter between China and the West. Distinguished historian D. E. Mungello focuses especially on Western homosexuals who saw China as a place of escape from the homophobia of Europe and North America. His groundbreaking study traces the lives of two dozen men, many previously unknown to have same-sex desire, who fled to China and in the process influenced perceptions of Chinese culture to this day. Their individual stories encompass flight from homophobia in their home countries, the erotic attraction of Chinese boy-actors, friendships with Chinese men, intellectual connections with the Chinese, and the reorientation of Western aesthetics toward China. Mungello explores historical attitudes and the atmosphere of oppression toward men with same-sex desire as he recounts the intensification of repression of queers in Europe and North America in the late nineteenth-century. He shows how China became a place of escape, a homosexual "land of Oz" where men could flee from the closets of their minds. Some traveled to China and lived there; others immersed themselves in Chinese culture at a distance. Most established long-term friendships and acted as cultural intermediaries who opened the aesthetic range of Western culture to a new sense of beauty and a fresh source of inspiration for poets, artists, and dramatists. Their "boys"-Chinese males whose services were available at low cost as messengers, rickshaw pullers, guides, cooks, entertainers, escorts, and prostitutes-were transformed into a universal metaphor of Chinese culture that lingers to this day. Indeed, outside men's range of relationships, intellectual and physical, have had a profound impact in shaping the modern Western conception of China.